I’m a firm believer in getting non-shooters to the range. Every single new shooter I’ve taken to the range has had a safe, enjoyable time, and about 80% have been shooting with me at least once after the first time (most of those who don’t are simply acquaintances or friends-of-friends, and we don’t often spend much time together).
Most people are perfectly willing to give it a shot (pun very much intended), but there are always some tough sells: whether the person is anti-gun, gun-neutral, or nervous, it can require a bit of effort to convince them to come. I’ve come up with a few tips for interacting with these people:
Getting Non-Shooters to Come to the Range

At this point, the non-shooter should be interested in going to the range. If so, schedule a time that works for both of you. If possible and desired, try to arrange for a few other people (new shooters, until-recently-new-shooters, and experienced shooters) to come with. Group activities tend to be more fun.
If the non-shooter remains uninterested, not a problem. Don’t insist on anything. It’d probably be a good idea to change topics and not bring up guns at this time. Perhaps you’ll have better luck in the future.
At The Range

I’ve followed these simple tips for years, and have introduced over a dozen people to the shooting sports. Everyone, without exception, has enjoyed themselves and left the range with a big smile. Several have ended up buying guns of their own and nearly (with the exception of friends-of-friends who I don’t see on a regular basis) have gone back to the range with me again.
A few dollars spent in ammunition and range fees (I always pay for a new shooter’s ammo, and nearly always pay for their range fee) can go a very long way at getting new shooters exposed to the sport, correcting common misconceptions about guns, shooters, and the shooting sports, and generally improving the RKBA.
It’s also really fun!

Evidently there’s a bill pending in the Arizona Legislature to mandate some sort of microcoding of ammunition, a 1/2 cent per-round tax, registration of ammunition, etc.
Good luck with that, particularly as the bill specifies that it would apply to “handgun and assault weapon ammunition” and, of course, Arizona has no legislaton defining an “assault weapon”, and there is certainly no federal law either.
I don’t think such a law will ever pass here, and I certainly hope it won’t.

Change.gov has the anti-gun proposals up on their agenda page again.
Once again, I urge you to write to Obama and to your legislators to voice your opposition to his proposals.

I have enough powder to load 2,500 rounds of .223 and enough bullets and primers to load about 1,500 rounds. I have no idea how many empty cases I have, but there’s at least 1,000.
I also have a whole bunch of empty AR magazines. Empty magazines don’t do much good, and I’m sick of cranking out hundreds of rounds the night before a trip to the range.
Thus, I’m setting a goal for myself: load at least 30 rounds of .223 every day until all of my AR magazines are full. After that, load 30 rounds a day until I’m out of components. If my finacial resources permit, then I’ll buy more components (with the exception of brass, which I pick up at the range) as required.
It’s not much, and it’ll probably take me a month or so to load up all my AR mags, but it’s not an impossible goal. Having ammo on-hand is always useful, whether it’s for an impromptu range trip or a zombie attack.

Dear Ammo Makers,
Stop crimping primer pockets. Unless you’re the military, it’s completely unnecessary.
Even if you are the military, it’s probably not necessary. How often do primers push themselves out, anyway?
Finding Remington and Federal brass in my range pickup bags is always nice, as their primer pockets allow for the easy but firm seating of primers.
Anyway, knock it off. My fingers are killing me and I can’t afford a Dillon swager.
Thanks!
-AZR

I’ve always been a big fan of Glock pistols: they’re not terribly expensive, they fit my hand well, they’re mechanically simple, and freakishly reliable. Sure, they’re not pretty, but I don’t care.
That said, why hasn’t Glock ever made a rifle…like, say, an AR-15? Not a 100% mil-spec one mind you, but something with some improvements. Say, have it striker-fired with the striker contained within the bolt carrier. A firing pin safety. A similar sear/disconnector to the one in their pistols — it could considerably simplify the working mechanisms of the gun itself.
CavArms has made all-polymer lowers and they turned out quite well. I’d imagine Glock could do something similar, or maybe just stick with the aluminum receivers and do some internal modifications.
Glock pistol magazines tend to be rugged and durable, with both a steel liner and a plastic outside. Why not make AR mags in a similar way, and have them be compatible with mil-spec ARs?
Many police departments and militaries around the world use Glock pistols. Many departments in the US are now equipping their officers with patrol rifles, usually AR variants (mostly likely because of the “Oooh! Shiny!” factor). I’m really surprised that Glock hasn’t gotten into this market.

MasterCard called me this evening to alert me to some suspicious transactions on my CapitalOne card. The card has been locked in my gun safe since August, and certainly hasn’t been used to buy $300 in gasoline (in three separate <$100 transactions) at a single BP gas station in Largo, Florida.
After the first two transactions went through, the card was disabled and the fraud department was notified. The third transaction was declined.
Of course, I’m not liable for any of the charges, and they’re sending me a replacement card (which will also go into the safe — I got the card because they charged no foreign currency conversion fees for my Europe trip, and now I keep it around as a backup) and an affadavit I need to fill out to attest that I didn’t actually make those charges.
I have no idea where the fraudsters got the card information, but I figured I’d let folks know so they’d be a bit more careful.
This is yet another reason why I stick to using credit, rather than debit, cards. While debit cards also offer the same consumer protections, you have to argue with the bank to get your money back (and there’s a risk of bouncing checks and whatnot during that time). With credit cards, you argue whether or not you owe the bank money, and you don’t owe them anything while the investigation is ongoing. There’s no chance for checks to bounce, as it’s not linked to your checking account.

I got another case stuck in my .223 die.
After the first few times doing this, I built a stuck case remover: drill out the primer pocket, tap it, then use a threaded bolt to pull it out. Simple, quick, and easy.
Unfortunately, it requires that the expander pin not be in the case. In this case, it’s well and truly stuck and the pin is still there…and blocks my drill from being able to drill through the primer pocket.
I sheepishly wrote a check to Lee for $4 and will drop the die in the mail tomorrow. If the last time this happened (about a year ago) is any indication, they don’t bother to extract them, but rather just send you a new one and the $4 is the cover return shipping. Not a bad deal.
Moral of the story: use enough case lube.

After seeing the picture of the awesome shirt, my friends decided to buy me the shirt for Veteran’s Day[1].
Observe: 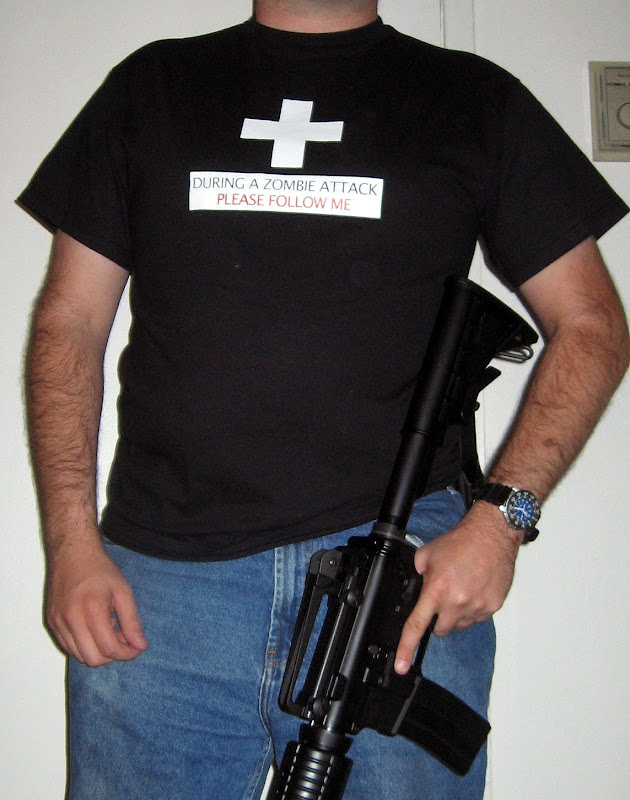 Awesome indeed.
[1] I don’t usually think of Veteran’s Day as a gift-giving holiday. While I certainly welcome the shirt (it does, after all, put off the dreaded Laundry Day by another day), I feel a bit sheepish in the face of all the attention my friends have been giving me. I did a job, got hurt, and came home. Not a big deal. Seriously, if you feel that you should honor veterans, that’s fine…but please direction such honor towards those who Went There and Did That. They deserve it, not me.