I must say that we are far, far too concerned with opinions expressed on social media such as Twitter and Facebook. Our obsession with what’s said on social media has become a bizarre social pathology. The number of people who follow someone on Twitter or like what someone said on Facebook does not enhance the validity or value of what they say in the slightest.

– “matthewpeterson”, in a comment on Excusing Cowardice Is Not the Path to Gun Control

Honestly, I don’t understand why we give any credence to anyone on Twitter. 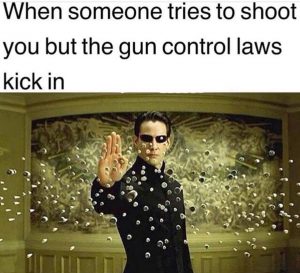 Despite having a ridiculous amount of firearms, Americans kill Americans at a higher rate with methods OTHER THAN A FIREARM than citizens in most European countries do. Think maybe it might be more complex than guns?

Maybe a lack of social safety net, an utterly underfunded mental health system, a culture of violence, a crippling cycle of poverty and lack of options for an underclass of Americans, and the failed war on drugs might have something to do with it.

You think? No, it clearly must be the guns…

In response to an poorly-disguised hit-piece asking, “with all these data and hard-hitting facts at our disposal, we have to wonder why the government is still sitting on its hands instead of supporting change.”, Weerd Beard responds with:

Maybe because your article is a crappy propaganda piece.

“Police wear body armor. Why would a community member be driving around in body armor?” Craig asked.

In this particular case, it’s because the bad guy wanted to protect himself from being shot while committing a crime. No surprise there. (It’s worth noting that felons are prohibited from owning armor.)
Leaving aside the fact that the wearer in this case was a criminal, I certainly don’t think it’s unusual at all for an ordinary, non-felon private citizen in a crime-ridden city like Detroit to consider wearing body armor. Type IIA or II armor will protect against the majority of common handgun rounds which one might encounter in a place like Detroit.
Is it uncommon for private citizens to wear armor? Sure, but it seems odd to question why a private person might want to wear armor. The answer is simple, and it’s exactly the same reason why a cop wears armor: they don’t want to get shot.

All that is necessary for the triumph of good is that evil men do nothing.

Ain’t that the truth.

“You’re paranoid, this isn’t a slippery slope” almost always means “I wish you hadn’t identified our attempt at incrementalism.”

Fark user paygun, in a post about the TSA

Screw quantum mechanics. I should have become a rocket scientist; it’d be easier.

– Me, after a particularly mind-warping quantum mechanics class.

Guns don’t kill people. Bullets kill people. Unless you pistol whip someone or hit them with a bayonet or the butt of a riffle, or the gun explodes or the gun falls from someplace really high and hits you.

– HoratioGates, in this Fark thread.

Sometimes the only way to deal with intimidation is with laughter.