It’s an oft-used cliche that anti-gun-rights people are fixated on the relative size of men’s…ahem, packages ((I still have yet to understand why this is the case, as essentially all of the gun owners I know personally, both male and female, seem to have satisfactory sex lives with no complaints about penis size. How did this cliche come about?)). This is usually phrased in a way similar to “Gun owners have small penises, and thus own firearms to compensate for this shortcoming ((Pun very much intended.)).”
However, an online comment on a recent article in the local rag proposed an interesting approach to self-defense:

I don’t need to carry a gun everywhere I go. All the real men in my family have a real penis.

My reading of this comment is that, due to its magnitude, the commenter would be able to fend off a criminal attacker with his (( Based on the posted name, the commenter is male.)) penis. I admit this is a rather novel idea, and one I haven’t considered before. This might be plausible, as several gunbloggers (including myself and Robb) are known for not liking pants. Intriguing. I would consider experimenting with such a tactic, but I’m a bit deterred by potential public indecency charges that such…uh…”open carry” might lead to. I think that it might be wiser to keep the junk and the gun concealed (or perhaps the gun carried openly, based on the situation and the weather).
On a more serious note, unless one is attacked while naked by an extremely self-conscious criminal, it’s unlikely that the size of one’s wibbly bits will have any bearing whatsoever on the outcome of a violent confrontation. It’s probably far better to rely on training and weapons designed for the purpose. To quote Breda, “Carry your gun – it’s a lighter burden than regret.”

The Brady Campaign likely has a nice office for their operations. The NRA certainly does.
What does my hidden base look like? Not much, actually: 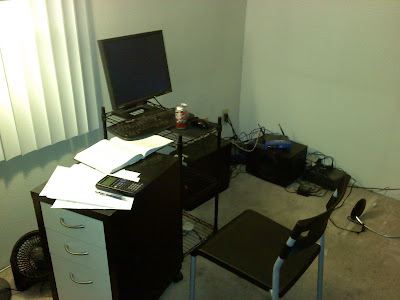 Why so barren? I’m moving out of my apartment this coming week, and just ended up selling my desk today, so things are a bit spartan. The textbook on my desk, such as it is, is an advanced undergraduate textbook on thermodynamics; I’m studying for my last finals before graduating.
The gun-rights-lobby consists of a whole lot of ordinary people like myself — though perhaps the others wear pants more often — who take a few minutes out of their busy days to write to their congressmen, write something on their blog, send a brief note out on Twitter, go to the range, or take a new person shooting. Why? Because we’re passionate about it. We shoot and talk about shooting because that’s what we love to do.
Love of liberty is a powerful thing, and as well-funded and politically connected as those who oppose the rights of law-abiding, honest people to keep and bear arms are, they have nothing that comes close.
That said, it’s time for me to get back to studying.