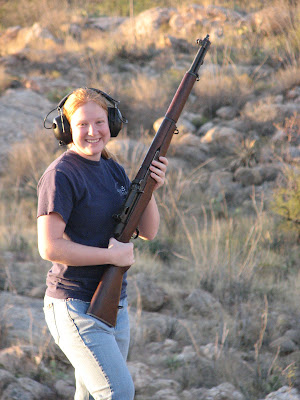 Why do you hate cute redheads?

It was my friend D’s birthday yesterday.
A pi?ata was involved.
However, the kite string that we originally intended to suspend the pi?ata with proved to be insufficiently strong and kept snapping under the weight of all the tasty candy…so we used a Cat5 ethernet cable instead.
You know you’re in the presence of geeks when nobody found the utterance, “Crap! The string broke again! Does anyone have any ethernet cable?” unusual. I suppose that’s the case when a bunch of physicists, astronomers, and computer engineers get together.

If you don’t care what’s illegal, you can do all kinds of things.

-Fark user Son Of Thunder, when asked where kids acquire guns for their acts of crime.

There really needs to be “felony stupid” charge for some criminals.

The FBI has released information about criminal uses of firearms in assaults on police officers.
Some interesting bits:

Arizona is, in essence, a land without natural disasters.
The most dramatic natural occurances we get here are:

The most dangerous part is that people freak out and forget how to drive in the rain, so there’s a few car crashes. The summer heat means I run my AC, so the electric bill goes up a little bit.
No major floods, no earthquakes, no hurricanes, no tornadoes, no blizzards, etc. The deserts have a lot of little scrubby plants, bushes, and cacti, but there’s not a lot of big trees (Northern Arizona is an exception) so wildfires are not a big threat.
I used to live in the San Francisco Bay Area, and while earthquakes were a risk, they weren’t a huge deal: they happened infrequently (unlike a “hurricane season”, there’s no such thing as “earthquake season”), modern buildings were constructed to be seismically safe, and our house was built on bedrock. During the big 1989 earthquake, we had a picture or two fall off the shelves. No other damage. It’s easy to prepare against an earthquake, but considerably harder to prepare against things like floods.
I’m still not sure why anyone settles in low-lying, flood-and-hurricane-prone areas. I’m even more puzzled as to why people who settle in those areas don’t buy insurance to protect against the risks they face. If I lived in a hurricane area and couldn’t afford flood insurance, I’d move somewhere where floods and hurricanes were not common. Like Arizona.
On a similar note, this blog is hosted in Phoenix by an excellent hosting company. The lack of major natural disasters was one of the reasons I chose to host there, in addition to their excellent stance on free speech, affordable price, and great performance and reliability. Lack of huge storms trying to destroy your datacenter is a good thing, even if it means that employees of my hosting company will never have to camp out in the datacenter with food and armaments.

Blackwater Worldwide announced its support of AB2498, proposed legislation that would prevent prohibited persons from unlawful access to and possession of firearms.
This legislation would serve to hold all responsible firearms training facilities to a common standard, allow training of responsible citizens, and, hopefully, reduce firearms capabilities of dangerous criminals.

AB2498 basically requires any firearms training facility with a written contract with the federal government to provide training services to require background checks on those seeking training there, unless the individuals are members of the police or military.
Somehow, I suspect that the criminals aren’t going to bother spending thousands of dollars at training facilities. Once again, a useless law that does nothing but inconvienience the law-abiding.
Update: Sebastian pointed out that this law would only apply to facilities with written contracts with the federal government to provide training services. I’ve updated the original post with italicized text.

The ATF issued a new ruling on 8/15/08 that clarifies various issues relating to what is or is not considered manufacturing a firearm.
Evidently a gunsmith buying firearms, doing work to them, and then selling them counts as “manufacturing” and the gunsmith must be licensed as a manufacturer.
A gunsmith receiving firearms from individual customers, performing work on the gun, and returning it back to the customer need only be licensed as a dealer or gunsmith, not a manufacturer.
My Class III dealer friend is concerned that this might affect companies that do outsourced work like rebluing, hard chroming, etc. for gunsmiths (i.e. gunsmith receives gun from customer, sends gun off to be chromed, third-party company does the chroming, then sends it back to the gunsmith, who returns it to the customer). My reading of the ruling seems to indicate that this would not be a problem, as it’s not manufacturing a new gun.
However, a gunsmith buying up guns on the open market (rather than doing contract work for customers), modifying them, and then reselling them on the open market would count as manufacturing a new firearm. I can sort of see how this would make sense.

Because this could happen.

Today, Michael Phelps won his 8th Olympic gold medal at a single Olympic event. Congratulations!
When the Star Spangled Banner was playing, I reflected on how unusal it must be to hear that song in Communist China.
In a comparable achievement, my girlfriend and I won a $25 Shell gas card while eating lunch at Texas Roadhouse this afternoon.