I’m sure I’m now on some sort of government watchlist.
Why? Just now, I have several windows open in Firefox, each with several tabs.
Among the various tabs open, one had the contact information for a local pizza parlor, another had the .223 page of Ammoman, a third had the Wikipedia article about plutonium, another about various radiation-emitting nuclear reactor accidents that have occurred, one showed the page for the D-Zero accelerator project from Fermilab, and another displayed the university’s physics department website.
I’m not entirely sure what terrible, nefarious plots the feds might think I’m up to, but they’re all true MUWHAHAHAHA! there is absolutely no truth involved in any of them. I just happened to be doing a bit of research (Fermilab, physics department), being distracted and reading about plutonium and reactor accidents (just for the heck of it), was looking for ammo deals, and was hungry. Really. I swear.

My contract with Verizon Wireless runs out in November, so I’m scouting out other providers. (I do this regularly with all services I use just to ensure I’m still getting a good deal.)
The only problem I’m finding is that even though Verizon does the occasional thing to annoy me, my service with them has been nearly perfect. I find no compelling reason to switch for just basic phone service (and I can’t afford an iPhone or BlackBerry), especially when my two-year-old Motorola W385 phone keeps chugging away with no problems other than a 9-12 month battery life (and since I can get replacement batteries for $5 including shipping, this isn’t a big deal).
Now, if only Jack Bauer’s cell company offered service to the public, I’d switch in a heartbeat. That guy’s phone seems to work everywhere, whether on an airplane, in an underground bunker, or in the middle of the bloody woods.

It appears as though ammo is getting to be somewhat more available, even if it is a bit more pricey.
As of the other day, the Tucson Sportsman’s Warehouse has a few dozen boxes of .223 Remington, which has been completely bare for the last few months. Murphy’s Guns has, for some unknown reason, had constant availability of Prvi Partizan M193 5.56mm NATO rounds for the last few months at not-unreasonable-for-retail prices. Now they’ve got a wider variety of 5.56mm/.223, such as 200-round packs of Federal American Eagle (which has been completely gone for months).
While Murphy’s prices for non-Prvi .223/5.56mm ammo is a bit steep, it’s not wholly unreasonable for the current market, and its good to see ammo back in stock.
Primers, though, are a different matter: nearly everyone I’ve asked is either critically low or completely out of primers. Murphys has some CCI Large Rifle primers for $33/1000, which seems rather high to me. Again, though, it’s nice to at least see some primers rather than none, even if the current stocks are closer to “none” than “some”.
I can’t wait for this stupid buying crisis to be over.

As I’ve previously mentioned, I’ve been out of work (( IT work for a bio-research department at the university. ))sick for most of this week.
In order to celebrateacknowledge my absence, my co-workers placed a gigantic, inflatable ladybug on my chair. 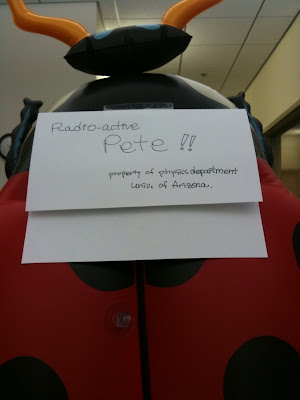 For those who may be concerned, I’d like assure you that my illness is not, in fact, due to radiation exposure, nor have I turned into a giant ladybug.
That said, I’m going to see if I can find a giant aphid…er…hamburger I say, HAMBURGER! for lunch.
My workplace is awesome.

I’ve spent the last few days huddled up in my apartment due to some sort of illness. The symptoms seem to suggest the flu.
Even with me being 26 and in otherwise reasonably good health, that virus kicked my ass.
I’m on the mend, but my boss and I agree that I should take the rest of this week off to avoid infecting everyone at work.
Argh. I hate being sick.

USA Carry has a useful site that maps out concealed carry reciprocity.

Guns are terrible weapons of death and destruction that turn anyone who holds them into a Chaotic Evil character if they fail a Will Save DC25 It is the duty of our Political Paladins to make sure such evil does not fall into the hands of men.

– Farker Lamune_Baba, in this thread.

Arizona, as you’re probably aware, is a land of intense, burning sun. While the winters are pleasant and enjoyable, the summers consist of a horrible ball of nuclear fusion focusing a not-inconsiderable amount of its output into your immediate vicinity. Think ant-under-a-magnifying-glass, wow-I-didn’t-know-asphalt-has-a-liquid-state type heat.
A few years of this heat pounding down on my car combined with an uncovered parking spot at my apartment complex, and I’ve begun to notice the effects: the back of the rear seat headrests were beginning to fade and the plastic speaker grilles on the back deck were crumbling to dust. While the fading cloth isn’t a huge concern (it’s on the back side of the headrests, and nobody ever sees it), the grills were a problem as they looked horrible and the crumbling plastic affected the sound produced by the speaker.
The dealer wanted a few hundred bucks to replace the rear grilles, and I thought that was outrageous so I ended up buying the grilles for about $22 and looked over the technical bulletin that accompanied them and explained how to put them in. I think the same people who write instruction manuals for IKEA also do the ones for Toyota — the graphics were lacking and the text was barely descriptive. Replacing the grilles required the disassembly of just about everything aft of the rear seats.
Fortunately, the engineers at Toyota designed their components to be both knucklehead proof and easily removed and installed using extreme force — the problems I ran into stemmed from the fact that I originally wasn’t applying enough force to overcome the various clips, catches, and other bits. Though replacing the grilles took several more hours than I expected and inflicted several nicks, cuts, and scratches on my hands, I was finally able to get it done.
I’d say that swearing at my car for a few hours was a reasonable price to pay in order to save several hundred bucks from the dealer. I took a bit of the money I saved and got my windows tinted at a place recommended by my mechanic. My hope is that the tint will keep the car cooler, and reduce the intensity of the light on the interior of the car.
Being moderately handy and curious about how stuff works actually has some real-world benefits, like saving money.

State Sen. Ken Cheuvront countered that the new Arizona law has more potential for danger because the state’s permit system is among the more lenient nationally.
“All I know is that guns and liquor do not mix,” said Cheuvront, a Democrat and the owner of a wine bar in central Phoenix. “They’re putting other patrons and my staff at risk by having a gun in my establishment.”

– Arizona Republic article.
Fantastic! He just demonstrated a total lack of knowledge about the law, as one of the key components of the law is that those who carry firearms into establishments that serve alcohol are forbidden from drinking. Not a drop. Even the journalists, who tend to not know much about firearms-related law, seem to get it. Why doesn’t he?
There’s another option: Senator Cheuvront is merely being disingenuous and a liar, but I suppose that goes with being a politician.

SB1113, the restaurant carry bill, was signed into law by the governor on Monday.
After several years of attempts and being vetoed by former-governor Napolitano, it’s finally been enacted. Just goes to show what an active grassroots movement can do.