I’m a big fan of BJ’s Brewhouse, a restaurant chain with tasty food and delicious beer (( Try their red. It’s outstanding. )).
There’s now two in Tucson. The first one, which is on the north side of town, used to have a “gun busters” (warning: PDF) sign, but after some polite prodding by the citizenry, they took it down — permit-holders are not forbidden from carrying there, so long as they don’t drink. There’s been no incidents of violence, gun-related or not, at the restaurant that I’m aware of.
However, the newly-built BJ’s on Broadway has a “gun busters” sign. A polite letter asking the management to remove the sign, like the other restaurant, has been dispatched to the management. I urge others to do the same.

SayUncle recently posted a link to Exploding Blog, which has lots of explosions.
Sure, it’s cool, but Explosions and Boobs is a bit more fun.

Google Accounts can be, but are not?necessarily, a Google Mail/Gmail account. One can have a Google Account without having a Gmail account (e.g. [email protected]) and can use such an account for accessing services like Google Reader, Google Docs, etc. I created such an account years ago for my personal email address.
Google Apps accounts are accounts associated with Google Apps, which are separate from regular Google Accounts. Google Apps provides email service for my personal domain.
Unfortunately, this means that both my Google Account and Google Apps account had the same username, which lead to considerable confusion.
I’m just now trying to get this all straightened out by only using Google Apps for email and XMPP chat and migrating all my other services (like Google Reader, Google Voice, etc.) to a single Google Account. This is exceedingly frustrating.

My friend recently acquired a Taurus PT1911. It looks pretty snazzy, and has the ambidextrous safety (( I’m left-handed. This is important. ))
Any thoughts? Is it a decent gun?

Ammoman sent out an email saying they have a special sale on Prvi M855. $349/1000 (shipping is included) is a pretty decent price — normally I’ve seen it sell for over $400/1000, without shipping, from other merchants.
I’m a big fan of Prvi’s M193, but have been looking for M855 for a while, and snapped up a case while it was available.
Update: D’oh. AIM Surplus has it for even cheaper, even with shipping taken into account. Of course, I discover this after I place the order at Ammoman. Live and learn. 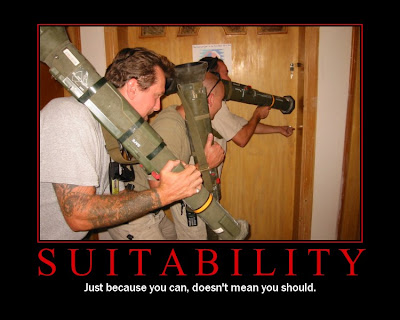 NBC was showing a program called “America Now: Faces Against Violence” that depicted the people involved with trying to reduce violent crime in Chicago.
I was intrigued that they really focused on “gun violence”, and many of the discussions involved complaints about “easy access to guns” rather than a profusion of violent criminals.
I commented to my wife that we have incredibly easy access to guns in our condo (( the holstered gun on my waist, two old revolvers in a case on the coffee table, and a pile of long guns in the closet )), yet we’re not even remotely prone to violence (( Though we do take MarioKart for Wii quite seriously )). Clearly, there’s more contributing to violent crime than simple access to firearms.
The parts of Chicago they were discussing had serious issues with gangs, drugs, and economic depression. I suspect these issues are a bit more important than bad guys getting guns. Take the guns away, and the gangs will use knives, rocks, or boards with a nail through it. Get rid of the gangs, and violent crime goes away. Funny how that works. I truly respect and admire those who are willing to guide vulnerable youth on the good path, away from violence and gangs.
I’m also quite happy that the law-abiding people in Chicago have had the most egregious restrictions overturned, and are able to (even though they need to jump through some hoops) own firearms for their own defense. Hopefully the remaining infringements will be overturned shortly, without the need for time-consuming legal battles.

Sebastian comments on the impediments that the government is putting up to limit the importation of surplus M1s from South Korea.
I’m a bit confused, because the M1 that I bought in 2005 from the CMP was one the US had loaned the Greek government, prior to its return. I’d imagine that things would be similar with Korea. The CMP has been selling M1s to the public for decades without incident (( To the extent of my knowledge. )), so why would a government official think it’d be an issue now? I’m presuming that any M1s imported from Korea would go through the CMP or, at the very least, through an FFL — why would concerns about the guns ending up in the hands of bad guys be any different for these fine rifles than with any other type of gun?
If anything, you’d think it’d be a good thing for criminals to have M1s: they’re large, difficult to conceal, require a bit of training to use effectively (( For example, reloading quickly. )), are incredibly loud, have a limited, non-expandable ammunition capacity, and shoot relatively expensive .30-06 ammo.
They’d better not be cut up, crushed, or melted. M1s are fantastic rifles, and I would be hugely put out if they destroyed them.

Though a lot of people seem to think otherwise.
I’m referring, specifically, to the controversy over the construction of an Islamic community center in lower Manhattan, about three blocks from where the World Trade Centers once stood.
To be precise, I’m not really sure why it’s a controversy at all: the people involved bought the property (an abandoned Burlington Coat Factory store) and wish to construct a religious community center on the property. So long as they’re in compliance with zoning and whatnot, they should be able to construct whatever they please there. The fact that it’s to be used for religious purposes should have no bearing whatsoever on its construction — people have a First Amendment right to believe (or not) as they choose (( Personally, I’m not religious in the slightest, and think that religion in general is somewhat silly. Even so, I respect people’s right to hold whatever beliefs they want, regardless of what I think of them.)). What’s the big deal?
All the arguments I’ve heard against the Islamic community center would make perfect sense…if “Muslim” was synonymous with “terrorist”. Of course, this isn’t the case: there’s over a billion Muslims worldwide and the vast majority are ordinary, decent people. Those within the US (and, indeed, anywhere else in the world) should not have their religious freedoms trampled on because of baseless opposition. Yes, some Islamic extremists have done terrible things to the US, but that should have no bearing whatsoever on Muslims as a group, the particular individuals wishing to build this center, nor on the construction of religious buildings.
Do I think it’s unwise or ill-advised for the owners to want to construct their facility so near the former World Trade Center? Not at all; it’s a free country, it’s their property, they can build whatever they want there.
Don’t like it? Don’t go there. Problem solved.

I came across an online ad that stood out to me today: it was an ad for ADT, and consisted of the text “Feel safe for only $1 a day”, referring to the cost of their monitoring service.
Personally, I think it’s rather silly. I can “feel safe” by simply ignoring any potential threats, and this costs me nothing. Of course, that’s rather foolish.
This also reminds me of the absurd ADT commercial where a burglar attempts to break in while the helpless family is at home, the alarm sounds, and the burglar flees. The police are notified, and presumably arrive at some point in the future. Of course, they never mentioned what would happen if the burglar didn’t flee…
By having a means to defend myself — rather than relying on others — I can not only feel safer, but I can be safer.
That said, a burglar alarm is a useful when one isn’t at home, as it can notify the police if someone is breaking into one’s house. $30/month still seems a bit excessive; I wonder if there’s some sort of lower-cost (or free?) internet-based monitoring, or perhaps even self-monitoring? I’ll need to look into that.