Guns don’t kill people. Bullets kill people. Unless you pistol whip someone or hit them with a bayonet or the butt of a riffle, or the gun explodes or the gun falls from someplace really high and hits you.

– HoratioGates, in this Fark thread.

Last night, I found myself up at the observatory again. Surprisingly it was not a Dark and Stormy Night, but there were a few clouds that kept us from opening for some time.
Personally, I find it somewhat of a downer that these photons originated in a star mumbledy-mumbledy brazillion miles away, flew through the uncharted depths of space past wonders unknown by human minds, avoided vast interstellar dust clouds and other celestial obstructions, and traveled on a path destined to intersect the imaging system of a particular telescope on a particular mountain on the third planet of a rather ordinary, uninteresting star in the spiral arm of one of billions of galaxies…only to be intercepted at the very last possible moment by a wayward floating blob of water vapor a few hundred feet above the telescope.
The final result of their mumbledy-mumbledy brazillion mile tour of the universe was not, unfortunately, to be detected by advanced equipment, analyzed by up-and-coming scientists, and hopefully used to allow said scientists to better understand the universe. Rather, the result was that a particular blob of floating water vapor was heated by some infinitesimal fraction of a degree while the scientists below shake their fists and curse the clouds.
Truly, a rather pedestrian end to a photon that has traveled so far.

Anyone here used Prvi Partizan ((Yes, I know their factory had an explosion. Somehow the local shop still has tons in stock at a reasonable price. Hope PP gets back to production soon.)) Match ammo?
Specifically, the 75gr .223 Remington stuff.
The local shop had a bunch for $12.29/20rds, which was just two bucks more than the PP M193 ((Fantastic ammo, 100% reliability in both my ARs, powerful, and pretty accurate for mil-spec stuff. It’s also actually available, unlike the US-made mil-surp. It’s also looks a lot better than XM193, and meets all the mil-spec. I’ve always been under the impression that Federal XM193 on the civilian market, while made in the US, was being sold to the public because it failed mil-spec in some minor, not-safety-related way. )) I was picking up, so I grabbed a box on a whim.
Normally I don’t think of “Made in Serbia” as being a mark of high quality, but PP’s M193 stuff has changed my mind, so I’m willing to give this stuff a try. Any experience?
Surprisingly, I was unable to find lot numbers on the individual boxes of 20 rounds. This is surprising for match-grade ammo (their mil-spec stuff has lot numbers on each box). Do they have the lot numbers printed on the case itself, if one buys in such quantities? It’d be nice to stock up a thousand rounds or two of the same lot so one could practice and compete with identical stuff.
Any additional information would be much appreciated.
Update: There appears to be some confusion in the comments. To clarify, I have shot several thousand rounds of Prvi Partizan M193 5.56mm NATO-spec ammo in the past and have found it to be excellent, and I now shoot it exclusively for recreational purposes. That said, I’m asking specifically about the Prvi Partizan 75-grain Match ammo. Has anyone used it in competitions? How does it compare vs. other match-grade ammo?

Thanks to generous donations to the New Shooter Ammo Fund, I have been able to purchase an additional 80 rounds of .223 ammo for teaching new shooters.
While 80 rounds might not seem like much, most new shooters I take to the range really seem to love the ARs, and so an extra few magazines worth is always useful.
I could have gotten quite a bit more .22LR than .223, but the local shop was short on .22, and didn’t have stuff that my 10/22 seems to prefer.
Many thanks to all those who’ve donated. The fall semester is off to a busy start, and I don’t have as much time as I’d like to take new shooters to the range (heck, I don’t know any more new shooters! Anyone in town want to send them my way?) right now, but hopefully that’ll become possible as grad school applications go out.

http://www.explosionsandboobs.com/
What more can anyone want? Maybe more explosions and more boobs? Just refresh the page.

As this burglar discovered the hard way.
Of course, this happening in Maryland requires the following bit of hand-wringing:

Authorities are determining whether the student will face criminal charges, Guglielmi said.

He’d better not. According to the CNN article,

Police did not release the name of the suspect, who Guglielmi said had a long criminal history, or that of the student.
[…]
The burglary suspect had been released from prison Saturday, Guglielmi said.

Student with a sword has three witnesses, presumably a police report documenting Monday’s burglaries, and the burglar has a long list of priors. Sounds open-and-shut to me.
I can’t imagine the horrible mess that a sword-stricken burglar, suddenly sans left hand, would leave in one’s apartment. I can only hope the cops left the students a sponge.
Update: More information from the Baltimore Sun and the AP. Evidently the bad guy was a habitual criminal.

Grant told cops that he was walking home from Amersfort Park at East 39th Street and Avenue J in East Flatbush around 1:30 a.m., when the gun began to fall into his pants, sources said.
When Grant grabbed for it, he accidentally pulled the trigger, firing a bullet right through his penis.

Folks, if you’re dropping your gun, don’t try to catch it. Let it fall, pick it up, and reholster it. Essentially all modern pistols are drop-safe. The embarrassment of dropping a gun is nothing compared to the embarrassment of shooting your own penis off.

To all of those visiting from Sebastian‘s, Uncle‘s, Tam‘s, Robb‘s, or elsewhere today, welcome!
You may be doing horrible things to my stats counter…

…but you’re still welcome. Feel free to look around. 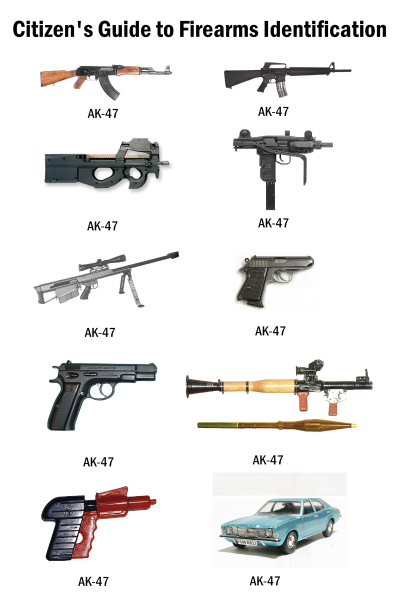 I received the following email from Ammoman this evening:

Dear friend and colleague,
With great sadness we regret to inform you of an incident at the Prvi Partizan Amunition factory in Uzice.
A series of explosions occurred Thursday evening, severely injuring fourteen employees. Seven injuries were fatal.
None of the machinery at the plant was damaged, but other damage was caused by activation of the sprinkler system which resulted in a flood that will delay production. It is estimated that production and shipping will be delayed approximately 2-3 weeks.
We are very aware the effect of this delay and appreciate your patience and understanding.
We will keep you informed as matters progress.
Sincerely,
TR&Z team

I’d like to extend my heartfelt condolences to the friends and families of all those killed or injured in the explosion.
So far, the news has not revealed any more information about the cause of the explosion. According to the BBC, six of the seven fatalities were women.
More details are available from various media sources here.