Update: It appears as though I was incorrect about these pistols being the “4th Generation” of Glock pistols. Rather, they appear to be a somewhat modified third generation — the “Rough Texture Frame Pistol”. From what I hear, the actual 4th Gen pistols will have adjustable backstraps and a less-aggressive grip pattern than the really rough textured RTF ones shown below. My apologies for any confusion.
The crowds were slightly less at the Glock booth today, so I was able to get my hands on one of the 4th Generation “fish gill” Glock pistols and a few minutes of time from some of the Glock employees.
According to the reps, all the internals are the same. Existing replacement and aftermarket parts will fit 4th Generation pistols.
New Slide Serrations
When asked why Glock changed the rear serrations from the previous straight lines to the new, curved design, one employee answered unofficially, “it’s high-speed, low drag” (( In short, it’s new and shiny. People like new and shiny things. ))
Another employee mentioned that the previous serrations went all the way from the top of the slide to the bottom, and so the steel at the bottom of of each serration was thinner. He had personally seen two previous Glock pistols, each used by extremely heavy users (100,000+ rounds out of each), suffer failures at the base of the serrations where the slide bent outwards. The “fish gill” serrations stop a millimeter or two above the base of the slide, leaving the base of the slide thicker and thus stronger. This is obvious in the below photograph that shows both the old and new serrations: 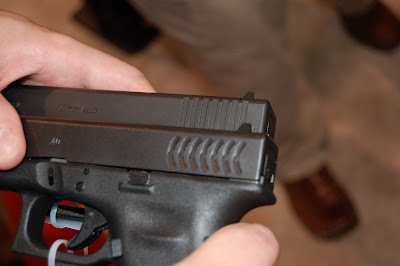 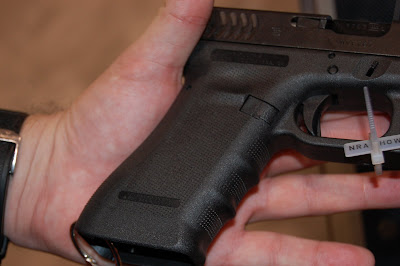 This texture consists of numerous tiny polygonal (( According to the employee. )) nubs on the backstrap, sides, and finger grooves of the pistol, rather than the larger, blockier nubs found on the backstrap and finger grooves of previous generations of Glock pistols.
While previous generations had textured panels on the grips, the new texture is considerably more “aggressive” (( Quoting one of the reps. )) than the previous texture. I’m inclined to agree, but feel that the new texture is extremely uncomfortable — the grips feel extremely abrasive, and I find the gun uncomfortable to hold with a firm grip. I’m also concerned with the gun gripping clothing, making concealment more difficult. Abrasion of clothing is another concern voiced by some readers.
A member of Pennsylvania Firearm Owners Association (I’m terrible with names, so I apologize for forgetting!) was walking around with Louis and I, and mentioned to the employee his concern about the possibility of the new texture irritating the skin on one’s waist when carrying the gun in an IWB holster.
It’s possible to make things “grippy” without making them feel like sandpaper: Hogue aftermarket grips are extremely comfortable and grippy without being hard on one’s hands. I doubt Glock would be able to integrate both the ordinary plastic used in their frames with Hogue-type rubber panels in a single molded piece, but I feel that’d be a better option than the new texture.
According to one of the reps, the texture becomes less “aggressive” over time, while still retaining its gripping ability.
Glock had small survey cards where they asked people’s opinion of the new serrations and texture. I indicated that I preferred the previous textures as they were more comfortable, and the previous serrations (though I wouldn’t mind if they stopped the serrations above the base of the slide, so as to strengthen it) due to their more utilitarian appearance, ease of gripping, and ease of cleaning.
Magazines
I inquired about the notch on the front of magazines shipped with current, non-4th-Generation Glock pistols. My understanding that the notch was designed to allow for an ambidextrous magazine release was confirmed, though the pistols equipped with such a release (( The G20, 21, 29, and 30 “SF” models. ))? are not terribly popular in the US for a few reasons, most notably because many holsters fit the pistols in such a way that they depress the ambidextrous mag release.
This issue results in the magazine being released when the pistol is reholstered. According to the reps, this is a problem with the holster makers, not with Glock — the design of the pistols is such that it is not possible for Glock to include an ambidextrous magazine release that doesn’t get pushed by most current holsters. In order for them to do so, the holster manufacturers would need to slightly redesign their holsters.
Additionally, one of the new models has a standard 1913 Picatinny rail, but this fits poorly with existing holsters due to the width of the rail. The models with the proprietary “Glock Rail” do not suffer this problem as the rail is smaller, but such models are still uncommon due to the mag-dumping-when-holstered issue.
None of the models on display at the booth were the “SF” models equipped with the ambidextrous magazine release, though they were selling various items like hats, shirts, and R. Lee Ermey (( Who, among his numerous other achievements and positions, is a Glock spokesman. )) action figures. The Gunny himself was present for a few days for handshakes, autographs, and pictures, though the line to see him was quite long. In overhearing his conversations with people, he seems like a decent guy; Mr. Ermey, if you happen to be reading this post and are in the Tucson area, please allow me to treat you to a drink.

After looking at the new Ruger SR-556 on Saturday, I went back to the booth today to ask a few questions I had and ask a few asked by readers. Unless specifically quoted, all questions and answers are paraphrased from notes. 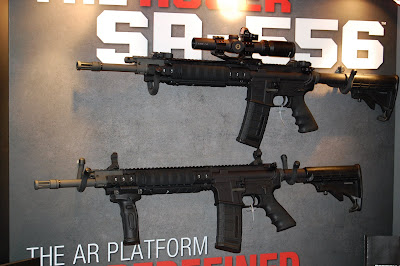 Other piston-driven ARs are considerably more expensive, often starting at more than $2,500. An MSRP of less than $2,000 for a piston-driven AR from a reputable manufacturer is quite a bit more affordable than other similar guns.

2. Do you intend to offer the SR-556 in other calibers, specifically .204 Ruger and 6.8 SPC?
Ruger is a publicly-traded company, which limits what we can disclose at this time.
3. Is the SR-556 upper and lower receivers compatible with other upper/lower receivers.
Our upper receiver will fit on mil-spec lowers, and mil-spec uppers will fit on our lower receiver. The SR-556 takes standard STANAG/M16 magazines.

4. Does Ruger intend to sell just the upper receivers to those who already have mil-spec lowers and want a piston-driven upper?
Not at the moment. Again, we’re a publicly-traded company and so cannot disclose certain things.

5. One reader mentioned that he shoots blackpowder .223 loads from his current AR. I have no idea why he does this, but he wanted to know if it was possible to do the same with the SR-556.
[hearty laugh] Honestly, I’ve never heard of anyone doing such a thing, and so cannot say if it’s possible or not.
6. Is the SR-556 compatible with registered Drop-In Auto Sears?
Not from the factory, no.
(At this point I asked him if I could look inside the lower, though he asked that we not take pictures of it. It had the standard cut-out at the rear of the lower where a DIAS would normally go, but without measuring equipment I was unable to tell if it was the proper size or not. Some machining may be required, but it doesn’t look like Ruger went out of their way to make DIAS installation difficult. Basically it looks like any ordinary lower one would buy from other manufacturers.)
7. Any plans for a longer-barreled target version?
No comment.
8. Any plans for a ban-compliant version that could be sold in California, Massachusetts, etc.?
This is something that Ruger could theoretically do, but I have no further comment on the topic at this time.
At this point, other people were clamoring for his attention and I felt like I had occupied enough of his time, so I thanked him and wished him a good day. (( I feel guilty for wasting people’s time. Does this make me a bad journalist? ))

Louis and I drove up to Phoenix from Tucson on Saturday morning, got horribly lost ignoring the fiancee’s excellent directionsnavigating the Phoenix area, paid our $12 fee to the parking gods, and checked in at the NRA Press Room where we met Sebastian from Snowflakes in Hell, then set off for the exhibit floor. END_OF_DOCUMENT_TOKEN_TO_BE_REPLACED

After perusing the exhibit hall yesterday, I’ll be heading back to ask the exhibitors some questions. All the non-exhibit-hall stuff seems to be well covered by others (and I hate sitting in little meeting rooms), so I figured I’d focus on the exhibit hall itself.
Is there anything in particular that my gentle readers wish for me to ask the exhibitors? Technical questions about Ruger’s SR-556? Should I let them know that the copyright notice on the bottom of their page incorrectly spells “Sturm” as “Strum”? Ask the HK folks if they might bring civilian-legal semi-auto (but still NFA-restricted) SBR versions of popular guns like the MP5 (( I know I’d love to get my hands on a semi-auto MP5K, or possibly a two-tax semi-auto, SBR, suppressed MP5SD.)) or G36?
You name it (within in reasonable bounds of polite conversation, of course) and I’ll ask it and post the response here. I’ll be checking my email and comments throughout the day.
For reference, a list of vendors and exhibitors is available here. 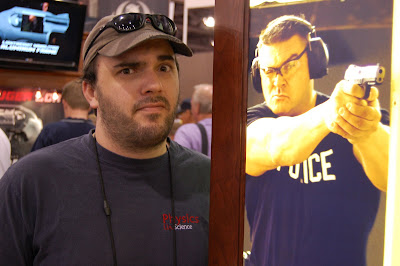 I’m going to be attending the NRA Annual Meeting and Second Amendment Blog Bash, though I’ll be unable to attend on Friday due to exams. I’ll be up on Saturday morning with Louis,? a friend and fellow blogger, as well as my fianc?e Sarah.
If anyone wants to meet up, please feel free to contact me by email and I’ll be glad to provide my cell number so we can link up at the meeting.
Interesting note: according to the NRA, lawful carriage of firearms is allowed at the entire event and exhibit hall, with the exception of events where alcohol is served (such as the banquets). Since I don’t intend to attend such banquets, I’ll be carrying.
Other interesting note: The NRA has been running ads on various electronic billboards (I didn’t see any physical boards, just the electronic ones) around the Phoenix metro area. I find it fantastic that they’re running billboards for the general public, and that there’s not some media or public backlash (at least I haven’t heard or seen any).
Hope to see everyone there!

Hey, everyone loves free stuff, right?
How about a free one-year membership to the NRA?
Other than the monthly magazine (which you can, of course, opt out of if you wish), it has some practical benefits, including the $1,000 in free insurance for your guns. Can’t complain about that.

It looks like the NRA Annual Meeting is starting for us mere mortals on Friday the 15th of May. Alas, I won’t be able to make it on Friday, as it’s the last day of finals. I’m not sure if I have any exams then, but it’s likely knowing my luck.
I should be there on Saturday and Sunday, though.
I’ve gotten some registration material from the NRA, but just want to confirm: is the annual meeting free for existing members (I’m a Life Member), or need one pay some sort of cover charge to get into the exhibit halls? I figure one needs to pay extra for the banquets and whatnot, but I’d hope the exhibit halls would be free for members. Can anyone confirm or deny this?