That’s what the Brady Campaign says about common guns like the AR-15 and various other features associated with common arms. The full quote from their page is as follows:

The Brady Campaign supports banning military-style semi-automatic assault weapons along with high-capacity ammunition magazines. These dangerous weapons have no sporting or civilian use. Their combat features are appropriate to military, not civilian, contexts.

Of course, this position is demonstrably false: these guns and features have plenty of sporting and civilian uses. I present the following as an example: 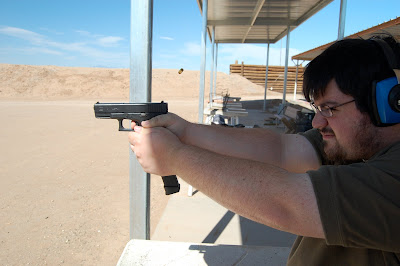 This is Louis. Attentive readers will recognize him from previous posts as he is a regular attendee of trips to the range. The gun he is firing ((Note the brass ejecting.)) is a Glock 19, chambered in 9x19mm. It is equipped with a Glock 33-round extended magazine. One will note that Louis is demonstrating good shooting form and is displaying a smile of enjoyment. The extended magazine allows Louis to spend more time shooting and less time stopping to reload magazines. 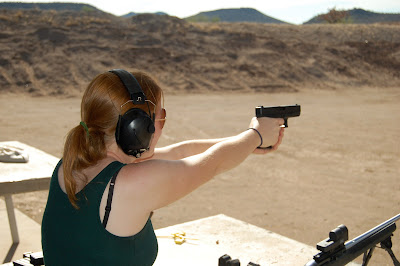 Here is Rita, who also frequently accompanies me on trips to the range, fires the Glock 19 with the standard-capacity 15-round magazine that is one of two included with the purchase of a new pistol.
This magazine allows for 50% more capacity than the Brady-recommended 10-round low-capacity magazines while still fitting flush with the bottom of the pistol’s grip. At the range, having five fewer rounds means more changing magazines and more time spent reloading — less time having fun.
Next up, we have Danielle: 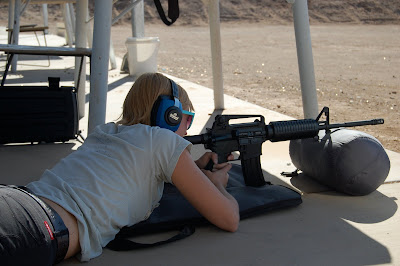 This was her first trip to the range. Here she’s firing a DPMS A-15, an AR-15 variant. It is equipped with all the standard features: a flash suppressor, bayonet lug, handguards which encircle the barrel, a 30-round standard-capacity magazine, a pistol grip, and a collapsible stock.
In this particular context, the bayonet lug is not being used, and so is no more dangerous than any other piece of metal ((The edges of the lug, however, are a bit sharp.)) on the rifle. The flash suppressor is not really relevant, as Danielle is shooting during the day and so does not need to worry about the flash from her muzzle affecting night vision — that said, the vents on the flash suppressor reduce the amount of dust kicked up from the ground, making her shooting experience a more enjoyable one.
The pistol grip and collapsible stock allow for comfortable shooting: she has adjusted the stock to a length which suits her. The ordinary fixed stock is too long and it is often uncomfortable for smaller shooters like Danielle.
The pistol grip allows for a firm, ergonomic, comfortable grip on the rifle. The forward handguards, which she is not using in this particular picture, prevent her from being burned by the hot barrel when she chooses to use her right hand to hold the gun rather than support her shooting hand.
The 30-round magazine is the standard size for AR-15 type rifles, and allows her to fire for a good period of time without needing to stand up or move around to fetch and load a new magazine. This also allows her to focus more on shooting rather than changing magazines. In this particular picture, she’s also using the magazine to support the rifle, allowing for more stable, accurate shooting.
The very features that the Brady Campaign claims are “combat features” that “facilitate the killing of human beings in battle” are being used by Danielle and tens of millions of other civilian shooters to enhance their safety (e.g. handguards that prevent burns) and comfort (e.g. ergonomic pistol grip and a stock that can adjust to be comfortable for both larger and smaller people). 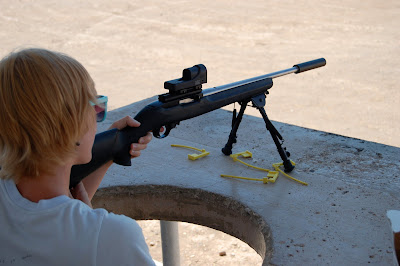 Here Danielle is seen shooting a Ruger 10/22 rifle, chambered in the lowly .22 Long Rifle cartridge, which is equipped with a threaded barrel and a Gem-Tech Outback II silencer.
The Brady Campaign states that silencers “allow an assassin to shoot without making noise” — while this is true ((Partially, at least — silencers reduce the noise produced by the gun to a safe level, but do not completely eliminate it.)), I think they might be watching a few too many James Bond movies. Assassins are exceedingly uncommon outside of Hollywood films, and any actual assassin will not care about the legality of silencers. They also claim that, “silencers are illegal so there is no legitimate purpose for making it possible to put a silencer on a weapon,” a claim which is demonstrably false: the silencer on this gun is perfectly legal, and I have all the appropriate paperwork in order.
Though I’ve addressed the legality of silencers in a previous post, I want to reiterate that there are perfectly legitimate reasons for wanting to own and use a silencer: I use mine primarily for introducing new shooters to shooting, as the low recoil and noise of a silenced .22 rifle makes for a very pleasant learning experience. Additionally, the use of a silencer reduces the levels of noise produced by a gun, reducing noise pollution and hearing damage.
In conclusion, there are numerous, perfectly legitimate sporting reasons for the private ownership of “military-style semi-automatic” firearms ((Which, I’d like to point out, are functionally no different than non-“military-style” semi-automatic firearms like the Ruger Mini-14.)) and magazines with a capacity greater than 10 rounds. There are plenty of other, non-sporting reasons (such as self-defense, collecting, etc.) for owning such firearms and accessories.
In short, the Brady Campaign is full of crap.
On a more positive note, it was a glorious, sunny day here in Tucson, and I was pleased to spend the day in the company of good friends, fine guns, and delicious food and (after the guns were put away) beer.