I’m an NRA Life Member. As such, I can vote for members of the Board of Directors.
Oftentimes, I find it challenging to find someone (let alone 23 someones) who I feel really good about voting for — they’re normally all quite pro-gun folks, have a long history of supporting individual liberties, etc. Nearly all would make excellent board members.
Well, this year it got a bit easier. There’s one person who I definitely will not be voting for: Pat Wray.
Here’s why.

– Woman at the grocery store gas station, in reference to my scooter.
Please note that I was in a gas station at the time, nozzle inserted into the receptacle on my scooter, actively filling it with gas* at the time.
*sighs* These are people I’m going to be sharing the road with? I’m afraid.
* $1.67 total, for a bit less than half a gallon. I didn’t need to fill up (it has a 2.5 gallon tank), but I was at the grocery store already, and figured it’d be good to buy gas anyway — if you buy gas after getting a certain amount of groceries (which I had), they give you $0.10/gallon off the posted price.

Main Entry: martial law
Function: noun
Date: 1933
1 : the law applied in occupied territory by the military authority of the occupying power
2 : the law administered by military forces that is invoked by a government in an emergency when the civilian law enforcement agencies are unable to maintain public order and safety

Note the spelling.
It is not “marhsall law” unless there’s some guy named Marshall who’s running around enforcing the law.
If you’re going to get all paranoid and start blathering about how the UN, New World Order, and Black Helicopters are going to be cavorting around Anytown, USA in some attempt to take away our rights, at least learn how to spell “martial” correctly.
You might still be a crazy nutjob, but at least you won’t look like a total idiot.

On Saturday night, a few friends and I decided that we hadn’t gone to the range in a while. Clearly, this needed to be rectified. Additionally, my friend’s girlfriend (hereafter referred to as “J”) had revealed that she had never been shooting, but wanted to learn.
So, on Sunday afternoon we went to the Tucson Rifle Club, paid our fees, and spent about three hours shooting.
Once more, my suppressed Ruger 10/22 proved to be an excellent rifle for teaching new shooters, as well as a fun one for the more experienced shooters. The M1 Garand and AR-15 were also big hits.
Some of the highlighted photos follow the cut. The entire album can be viewed here.
For those who can’t be bothered to click for more pictures, the whole trip can be summed up as follows: 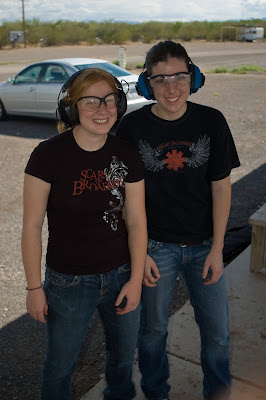 Just upgraded to WordPress 2.6. So far, so good. If you notice any problems, please let me know.
Also, please ensure that your feed reader is set to use http://www.arizonarifleman.com/feed/ as the feed address. If you link to this site, please update your links to point at http://www.arizonarifleman.com/ rather than http://azrifleman.heypete.com/ — the latter address (and its associated feed address) will be discontinued in the future.
Oh, and if you link to or read this humble blog, thank you!

The Tucson Rifle Club has extended its weekend hours. It normally closed at 5pm, but presently closes at 7:30pm on Friday, Saturday, and Sunday.
On a different note, I discovered that an annual membership is $40. I really should sign up for such a membership, as the range is about the same distance from my apartment as the National Forest, but is much better maintained.

Saturday night was the celebration of a good friend’s birthday. All went well until one of the fellows there had a wee bit too much to drink and decided to demonstrated this by (a) jumping into the swimming pool fully clothed and (b) upon returning to my friend’s apartment suffered an urge contrary to swallowing. On the carpet. In prodigious quantities.
Ugh.
To make matters worse, my first aid kit was back at my apartment in my Europe travel back (still need to unpack) instead of in my car. Cleaning up various bodily fluids (and the occasional solid – yuck) without nitrile gloves is Not A Pleasant Experience(tm). Fortunately, the apartment owners had a considerable quantity of plastic grocery bags*, and those served reasonably well as makeshift gloves.
The fellow in question then remained in the bathroom for about three hours (while I tended to him for about two and a half hours) before sobering up enough to be driven home without befouling my car.
Morals of the story:

The Arizona Rifleman website has changed addresses! Please update your links and feed readers to reflect the new address for this site.
Old website: http://azrifleman.heypete.com/
New website: http://www.arizonarifleman.com/
Old feed address: http://azrifleman.heypete.com/feed/
New feed address: http://www.arizonarifleman.com/feed/ (Enter this directly into your feed reader. At present it forwards to FeedBurner, but this may change in the future. By entering this URL directly, you can keep up with any changes.)
The old website and feed address will be kept operational for some time, but will eventually be discontinued. I will let you know before this happens, but please change things over sooner rather than later.
If you experience any problems with the new address, please let me know. Occasionally there are transient quirks for the first 24 hours.
Thanks!

Today, our great republic turns 232 years old.
To many in Europe and other parts of the world, this is not a very long time at all: the Chinese Zhou dynasty was in power for 829 years, and was one of many dynasties in power in China since the bronze age. European countries have histories stretching into early history, with stable forms of government existing for hundreds of years.
Even so, republics and other forms of representational government are quite rare. While I’m not a historical scholar (focusing instead on science, specifically physics and astrophysics), I have read a fair bit about history, and I’m not aware of any nation in all history where the citizenry lived in such freedom, with a government so accountable to the people.
Now, that’s not to say that our republic is perfect — far from it. This nation has made its share of mistakes, some from the very beginning: the terrible institution of slavery being the most serious in my opinion. More recent intrusions on liberty are more subtle, I think, and pose serious long-term issues to this country.
This country has been through times both wonderful and trying. From great wars and economic depression to the height of scientific achievement and putting men on the moon, this country and her people have so far gotten through more or less unscathed. There’s been a few times — including recently — where liberty has taken a bit of a hit, but she keeps getting back up again.
I’ve travelled to dozens of states and even more countries, and every trip I take gives me a new perspective back at the USA and how good we have it. Even the darkest days of our nation’s history are often better than ordinary days in many places in the world, both past and present.
Truly, the United States of America is an incredible country, made up of diverse and wonderful people, and spans some of the most beautiful lands on earth. The founding fathers were learned men of reason, and I am deeply in their debt for instituting such an excellent form of goverment. I am grateful to be alive at this point in history, and hope that this republic continues to prosper in the future.
And now, I think it’s time to celebrate this nation’s history by going out and exploding a small part of it.

Some days, I think comedy shows need disclaimers saying “this is a work of comedy, and not to be taken seriously”. Why? Because people like Nancy Giles might think such propositions are a good idea:

The comedian Chris Rock had a brilliant idea that I think both gun owners and gun control advocates could agree with (or “agree to”).
Instead of gun control, he says, “we need bullet control! I think every bullet should cost five thousand dollars. Because if a bullet cost five thousand dollars, we wouldn’t have any innocent bystanders.”
Sounds like a good start to me.

Really, Nancy? You think gun owners would agree to such a proposition? A 50-round box of .22LR currently costs about $2. You really think that we’d be willing to pay $250,000 for that same box? Doubtful.
Given my current budget, that single box of ammo would take a lifetime of savings for me to purchase, yet you think I’d agree that’s a good idea? I think not.
Chris Rock is a funny guy, but his idea was intended to get a laugh…not to be taken seriously.
Now, let’s play a game of what-if: What if this idea became a reality, and each cartridge cost $5,000? Like most other gun-control ideas, I’d posit that nothing good could come of it. Criminals would still be able to acquire ammunition without too much difficulty, and law abiding citizens would take the hit.
Consider this:

Truly, such an idea would be doomed to fail immediately. Why anyone would ever entertain such a thought for even a moment is beyond me.