As is my habit, I was perusing Fark.com this morning. For some reason, I had Adblock Plus turned off and so ads were visible.
Imagine my surprise when I saw an ad for Front Sight appear on Fark: 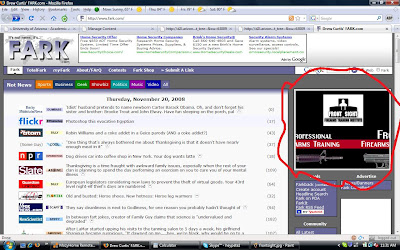 (No, I didn’t have a stroke while drawing the red circle. Do you have any idea how difficult it is to draw a consistent, mostly-circular line using a laptop touchpad?)
Fark is known for its snarky headlines and goofy comment threads (if you don’t get your newsNot News from Fark, you’re missing out), so I was a bit surprised to see Front Sight ads running in the Google Ad panel there. Very cool.
I think that such ads going out to the general public is a good thing: if it helps get one person trained, and saves one life (astute readers will see what I did there), then it’s worth it. I’ve been to Front Sight, and while their “Front Sight Family” stuff was a bit odd and there’s accusations about various financial-related issues, the training was solid.
I’d like to see more gunny companies advertising to the general public. I see ads for “$NAME Ford Dealership” on TV at my girlfriend’s (I don’t own a TV, nor have time for it), why can’t I see ads for “$NAME Gun Shop” or ads for Bushmaster and Remington firearms? I wonder what Glock could do in a TV ad. 🙂

This will leave a mark:

(Skip to 1:45 for the good stuff.)
This looks like a fairly significant BLEVE. Ouch.
I hope any readers in Toronto are all right.

While eating dinner with neighbors Thursday evening, we observed numerous Tucson police cars driving by with lights and sirens going. After we left, we observed the SWAT van rolling in the same direction, followed shortly thereafter by a couple more police cars and what appeared to be a mobile command unit. Since I’m no longer getting paid to run toward dangerous situations (and as our apartments are located in the opposite direction), we didn’t personally investigate the situation.
According to the Tucson Citizen, the TPD SWAT’s M113 armored personnel carrier was also summoned.
Why, you might ask?
Well, from what I can make out (information is spotty, as the police have cordoned off a large area, and won’t allow anyone, including journalists, in or out), one guy has holed up in a house. He claims to be armed, and he is known to be a “prohibited person” and is prohibited by law from owning guns. The reason for his prohibition is not yet known, nor is the reason why he decided to hole up. No shots have yet been fired.
This whole situation seems a bit unusual to me. Here’s what puzzles me:

After a few years in the military, I can’t really imagine any sort of realistic (or even semi-realistic) scenario where an APC would be required by police anywhere. The only remotely possible situation that comes to mind is a rare scenario like the LA riots where an APC could provide mobile shelter for riot police, mobile storage for munitions (tear gas, rubber bullets, etc.) and supplies, and a mobile strongpoint for police to rally around as they disperse the mobs of people. Somehow, I don’t really see that happening here in Tucson…or if it did, just call in the National Guard.
Honestly, I don’t get it. The whole situation seems like a huge overreaction, particularly with the APC involved. What could an individual possible do that would warrant such a massive response?
Hopefully more information will be available on Friday.
UPDATE: According to the police (as reported by the Citizen), the suspect had a record of drugs and weapons offenses. He was evidently also a heavy meth user. The police showed up to arrest him when he barricaded himself inside. The suspect killed himself early this morning.

Story here. The TPD officer who was shot in the head with a rifle is not doing well, and is not expected to live. Two Pima County Sheriff’s deputies also received relatively minor gunshot wounds.
This is a terrible tragedy. My sincere thoughts and best wishes go out to the wounded officer and his family.
The only good thing that can be said is that the suspect is in custody and will have his day in court, as opposed to having escaped and be at large.
Details about the specific type of weapons used in the gunfight and found in the suspect’s vehicle are not immediately available, though several news organizations suggest the primary weapon involved was an “assault rifle”. Considering the media’s lack of knowledge of firearms-related topics, this term could very well mean “any gun at all”.
More information as I get it. If anyone here was a witness to the events or has additional details, please contact me.
UPDATE: Officer Hite succumbed to his wounds at the hospital, reports the Tucson Citizen. The suspect has been re-booked on first degree murder charges. The two sheriff’s deputies who were wounded were released from the hospital today as well, so there’s some good news.

Article here.
While I dislike rising ammo prices, I’m pleasantly surprised to see a mainstream news organization reporting on the increasing cost of ammo in a neutral fashion, just like they would report on bread, milk, gasoline, etc.

Over the years, I’ve noticed that many media outlets (newspapers, TV/radio stations, etc.) have made several factual errors when reporting on firearms.
While some of these errors are fairly minor and hardly worth mentioning, several have been incorrect in critical ways.
For example, many news outlets reported that the sunset of the 1994-2004 federal “assault weapons ban” (“AWB”) would result in new machine guns being legal for private citizens to purchase. This is not true; the AWB did not apply to machine guns (which are regulated under a separate law created in 1934 and which remains in effect), but many of the guns that were restricted under the AWB have a similar appearance to machine guns, hence the confusion.
Incorrect reporting of such facts can result in uninformed and/or misinformed decisions by the citizenry and legislatures, which can seriously affect millions of American citizens and businesses.
Thus, in the interest of providing accurate, non-biased information to the public, I make the following offer to any and all media organizations, large or small, wherever they exist in the world*:
At no financial cost, I will…

To take advantage of this offer, simply contact me within a reasonable period (I recommend at least a day or two at the bare minimum) before your deadline with any questions you might have. If, during the course of discussion, more questions or issues arise, I will be glad to assist you with those as well.
* While I welcome inquiries from around the world, I regret that I can only communicate in the English language.