As some might recall, I traveled to Egypt and Jordan over the winter holiday. My wife and I took around 4,000 photos — we’ll spare you all the details and just stick to the highlights.
Both nations were fantastic: everywhere we went the people were pleasant, the sites stunning, and the food delicious. Everywhere was steeped with history. This post is briefly about Egypt, with a soon-to-follow post about Jordan.
At the time (about a year after the January demonstrations in 2011), Cairo had a bit of reputation for being unsafe and so there was essentially no tourists anywhere there. Fortunately, Cairo was quite safe and we ran into no trouble whatsoever and got to benefit from the lack of crowds at the various attractions; unfortunately, you could tell that business was slow for a lot of tourism-dependent merchants. Outside of Cairo there was a lot more tourists — the majority of tourists in Aswan and Luxor were Russians — and business seemed to be better, though the guides said that tourism has definitely been down since the revolution.
One of the great highlights of Egypt is, of course, the Pyramids of Giza. It should go without saying, but the pyramids are really big. 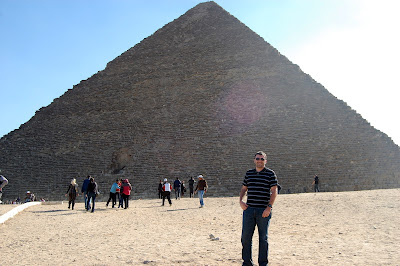 Did I say big? I meant stunningly massive. The Great Pyramid (the one I’m standing next to) is 5.9 million metric tons. 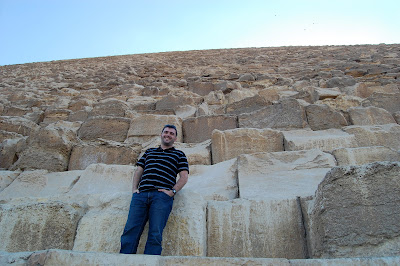 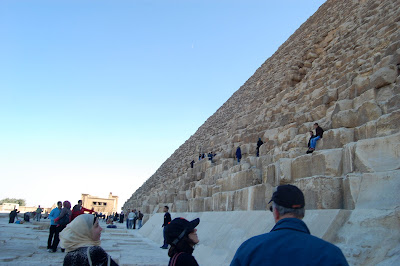 The Sphinx is right nearby: 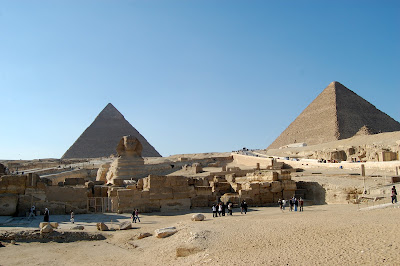 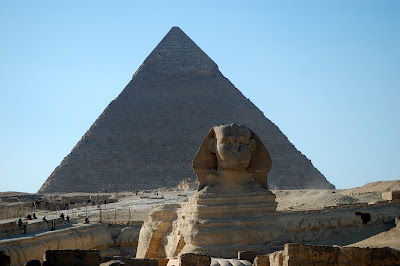 In the right photo, it’s clear that the level of the desert has risen significantly since the Sphinx was originally constructed. The part above the old ground level (around the Sphinx’s shoulders) is weathered and has been smoothed by thousands of years of sand and wind. The part below that level looks almost pristine. It’s incredible that the Pyramids and Sphinx have lasted this long and remain in such (relatively) great condition.
When most people think of the Pyramids, they think of something like this: 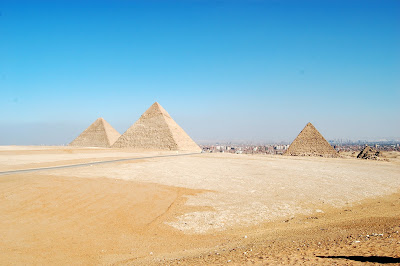 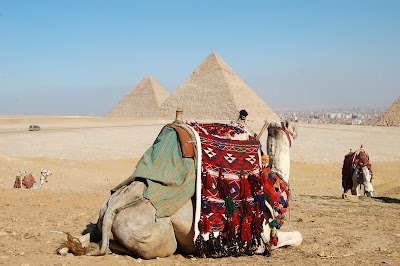 That is, huge pyramids standing in the middle of the desert, distant from civilization — maybe some palm trees and camels to round it out?
In reality, the city of Giza has grown right up to the base of the Pyramid Complex. There’s a pizza hut only 200 meters away from the base of the Sphinx. Can you find it? (As with all pictures, click to enlarge.) 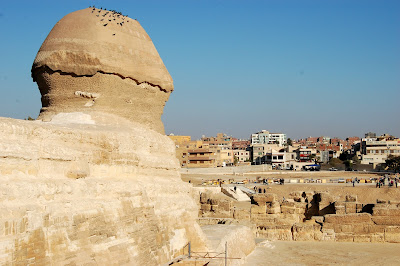 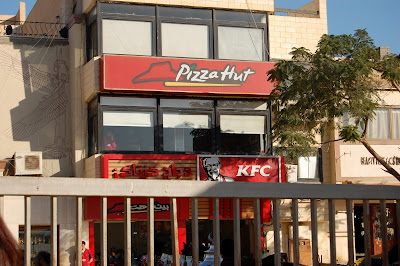 Yes, having a Pizza Hut and KFC within 200m of the Pyramid Complex is somewhat surreal. No, we didn’t eat there.
The Egyptian Museum in Cairo houses an outstanding collection of ancient Egyptian artifacts. Photography was not permitted, so you’ll have trust me when I say it was fantastic. After the revolution the interim government of Egypt has requested that many Egyptian artifacts housed in other museums around the world (such as the British Museum in London) be returned to Egypt. As a show of support for the new government, many museums have returned some or all of their artifacts.
One of the most popular reasons that tourists visit Egypt is to visit the ancient Egyptian sites (the Pyramids, Sphinx, Valley of the Kings, etc.). Somewhat more modern Egypt is also quite interesting, particular the religious history of the nation: while the majority of people in Egypt today are Sunni Muslim, about 10% of the population is Christian (there’s a small population of Bah?’? and an even smaller population of Jews in Egypt as well). Regardless of faith, Egyptians hold a strong national identity — Christian Egyptians tend not to see themselves as religious minorities, but rather Egyptians whose ancestors were Christians and passed the faith down to their descendents. That’s not to say there’s no religious strife in the country (there certainly is!), but for the most part Christians and Muslims in Egypt get along quite well. We walked along many streets that had churches and mosques right next to each other, with people coming and going from each and offering friendly greetings to each other.
As both Christianity and Islam go back quite a ways in Egyptian history (with Christianity in Egypt extending back to around 33 AD and with Islam coming to Egypt around the year 639 AD), leading to a rich history and intricate architecture built by people of both major faiths being present in Cairo. There are various districts in the city that are “Coptic Cairo” and “Islamic Cairo” that have clusters of historical churches and mosques respectively, and are well worth the visit. Even as an atheist, I found the historical aspects and societal interaction of the two faiths to be particularly fascinating.
Cairo is sometimes referred to as the “City of a Thousand Minarets” and it wouldn’t surprise me if there were that many: mosques are ubiquitous around the city (a necessity, as observant Muslims should pray five times a day [preferably in a mosque], and people don’t want to travel far from home or work to pray), each with towering minarets dotting the skyline. Interestingly, the adh?n (the Muslim call to prayer) announced from loudspeakers on the minarets was not synchronized from mosque-to-mosque: five times a day there’d be a 10 minute period where the various calls would start at different times and overlap each other. Some mosques decided to turn up the amplifiers a bit higher than others, resulting in distortion. Needless to say, the times when the adh?n was announced were loud and chaotic.
Cairo is a huge city and, common to post-revolution cities, is a really dirty one with some serious issues: in many areas there hasn’t been garbage collection for over a year and there’s huge piles of garbage bags on the side of the street. The pre-revolution Mubarak government built some shady apartment buildings all throughout the city to house the poor (mostly to keep them from rioting, rather than out of the goodness of his heart — shows how well that worked) and these buildings remain half-finished, derelict, with no windows, but still occupied. There’s also a huge “City of the Dead” — a huge necropolis and slum that houses over 500,000 living people and countless corpses. That was a bit eerie. Traffic is unbelievably bad, nobody obeys traffic rules (mostly because the traffic cops have all but disappeared since the revolution), donkeys can be seen pulling carts of vegetables onto controlled-access highways, and so on. I was very glad that our driver, the self-proclaimed “Mohammad Schumacher” (a skilled driver who was constantly telling jokes, laughing, and enjoying life), was the one behind the wheel and not me.
Of course, not all of the city is a dirty, dusty slum: there’s plenty of beautiful places, most of which are free to the public (the rest cost about $0.20-$0.50 USD to get in — this is the Egyptian equivalent to an American needing to pay $5-$7 to get into a similar place in the US). Sunset in the Al-Azhar Park in Cairo was amazing: young lovers were strolling hand-in-hand, children were running around and laughing, musicians and dancers were having a small event in one area of the park, and water flowed from fountains and along waterways as the sun slowly set over the desert. 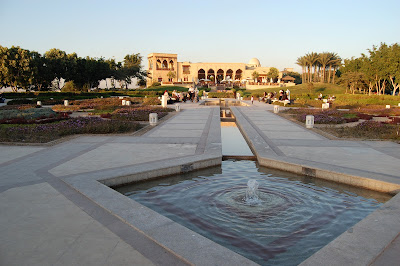 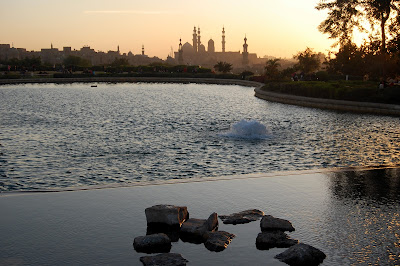 Cairo is simultaneously the most outrageously busy, disorganized, and beautiful city I’ve ever visited.
I’d love to go back sometime, but for now I need to focus on my studies. That said, you should go visit. There’s tons to see, the people are friendly (though the drivers are maniacs!), and we had a great time. They’re also hurting for tourists, and appreciate those that do visit. I’d be happy to recommend our tour company and guide to those who are interested, but I’d prefer to avoid mentioning them publicly to avoid the implication that my site is promoting them or that they are somehow sponsoring me.

5 thoughts on “Travels to Egypt”