Rita and Teresa have been accompanying me to the range for some time. They are regulars at turning ammo into smiles.
Interestingly enough, Teresa happens to be dating Nolan, Rita’s brother. Now that Nolan has moved to Tucson for school and had never been shooting before, we all figured it’d be a good thing to take him out to go shooting. So we did… 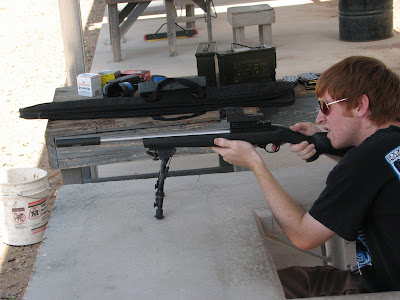 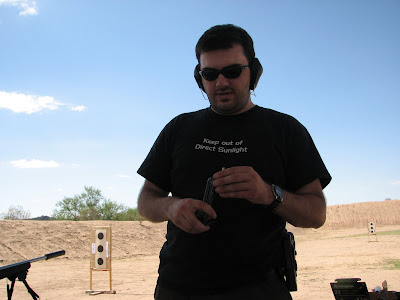 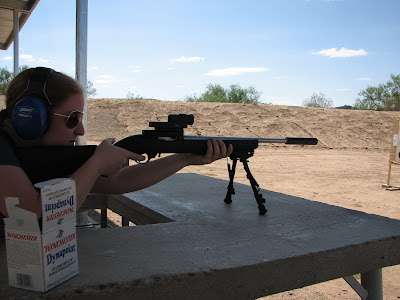 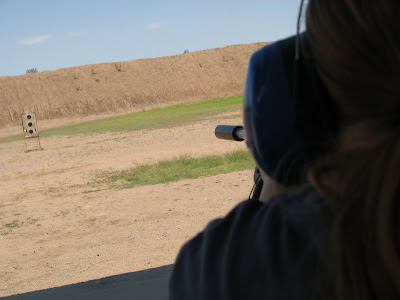 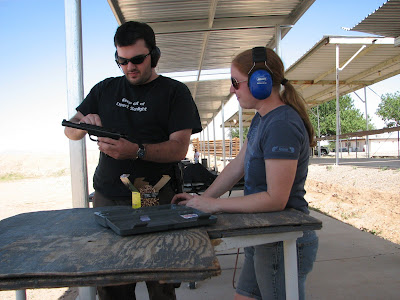 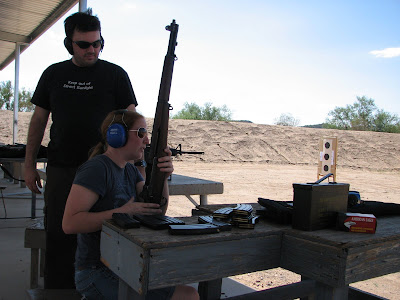 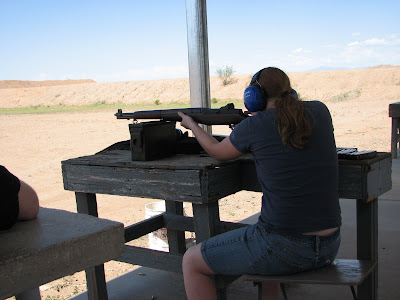 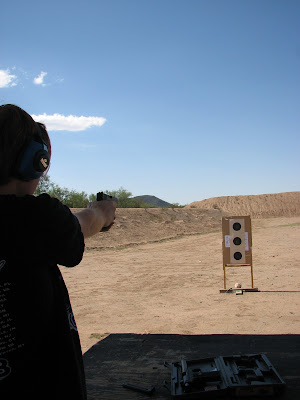 Once again, it was a beautiful (albeit hot) day in Tucson. Thank goodness the Tucson Rifle Club has overhead shades for the firing line.
Rita, myself, and my med student friend Ian spent a few hours on Saturday reloading .223. Out of the 120 or so rounds we fired today, there were only three failures (( Two were jams due to the out-of-round bullets we’re using. One was due to one of the rounds having some goopy black residue on it. )), none of them dramatic (( Note for reloaders: double-check your bullet weights against the load data tables. I foolishly assumed that we were using 55gr bullets as that was what I normally load and picked a middle-of-the-road load from the tables. Turns out we were using 62gr bullets and the powder charge we were using turned out to be rather near the never-exceed range for .223. Eep. Fortunately, we never actually crossed the never-exceed line, and even so the loads were several thousand PSI below the 5.56mm NATO pressure spec, which is what the rifle was rated for. Fortunately, we discovered this condition at the reloading bench after we loaded a few hundred rounds, so we were able to confirm that the loads would be safe by consulting the tables. The rifle did not explosively self-destruct, which is good. )). It’s nice actually having some .223 ammo, as my ARs are quite voracious.
I had also dug about in my closet and found some .30-06 reloads, so we were able to shoot the M1 (Rita has a bit of a love affair with my M1, and really enjoys shooting it.) a bit. Shooting the M1 seems to be a family trait, as Nolan also greatly enjoyed shooting it. There’s something immensely satisfying about recoil, .30 caliber bullets, and large dust clouds behind one’s targets.
As usual, the suppressed Ruger 10/22 was a big hit, as were the Ruger MkIII and Glock 19 pistols. Fun was, as usual, had by all.
The fall semester starts up again in about a month, so I’m hoping that I’ll be able to find some new shooters to take to the range then. For now, I’m happy that I managed to get another new shooter out to the range. When Rita and Nolan’s parents are in town, I may have to take the whole family out shooting.

One thought on “New Shooter Report”