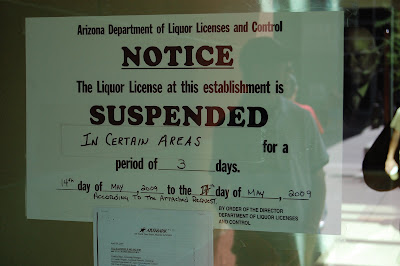 For all the progessive gun laws that Arizona has (( Most notably the fact that open carry is legal in most places without any permit being necessary. )), it has a major flaw: at present, it is prohibited for a person to carry a firearm (even if they have a permit to carry concealed) into any establishment that is licensed to sell alcohol for on-premises consumption, even if the person does not drink and even if the sale of alcoholic beverages is temporarily suspended.
While I enjoy a good drink and finely-crafted guns, I strongly believe that drinking and the carriage of firearms should not be done at the same time. Much like drinking and driving, doing so is irresponsible.
That said, I see no reason why I (or any other law-abiding person) should have to disarm simply becuase I wish to enter an establishment that serves alcohol. As the law stands now, I’m prohibited from carrying when I go to Chili’s, even if I’m just there for a burger and soda with friends. If I’m walking around armed, as is my custom, I am forbidden from entering establishments like Chipotle for a burrito simply because they offer bottled beer.
This issue was a concern for the Phoenix Convention Center, as the center has a liquor license. Fortunately, they were able to successfully petition the Arizona Department of Liquor Licenses and Control for a temporary suspension of the liquor license in most areas of the event, thus allowing private citizens to legally carry guns around the event.
Certain functions at the event, such as the member banquet, served alcohol. In these places, the NRA maintained a gun-check station and allowed people to securely stow their arms prior to entering the restricted area. However, members who wished to eat at several of the nearby restaraunts were unable to do so, as many of them served alcohol. This was an issue for myself and a few other gunbloggers when we went out for lunch on Saturday and Sunday.
I’ve written to my state officials to encourage them to change the law so that people can legally carry in restaraunts so long as they don’t drink. I urge you to do the same.