I’ve spent so much time over the last few years teaching new people the basics of shooting that I’ve not really had time to practice on my own. Alas, I seem to have lost quite a bit, and need to practice more.
Saturday was supposed to be a big group shooty time, but we had 5-6 people either cancel at the last minute (one due to feeling ill, so that’s ok) or simply not show up (turns out that they had partied a bit too hard on Friday night, and were still sleeping it off). As such, it was just Doug, Louis, and I who went to the range.
Doug had been working on a small, programmable microcontroller for a few weeks. His hope would be that when the chip detected a sharp sound (e.g. from a gunshot), it would fire an IR LED with the proper sequence to trigger the shutter on a Nikon camera. We wanted to get some pictures of bolts cycling, as human reaction time is just too slow to get satisfactory pictures. Unfortunately, the microphone was a bit too sensitive, and the wind kept triggering it, so we abandoned that plan and just ended up shooting all day. Oh well.

It’d been far too long since I was behind a trigger, and I admit that my technique has degraded a bit. While rusty, I was consistently rusty. So long as I maintain that consistency, I think I should be able to improve quickly with some more practice. For practice, I think I should find a specific, standard type of ammo (like Prvi M193 or something), zero for it, and

In addition to the standard paper targets, we also brought my Do-All-Traps spinner target that Sarah had given me for Christmas. According to the box, it’s rated to handle 9mm Luger all the way up to .30-06 Springfield, so long as one uses soft point bullets. Alas, I have no soft points, and factory loaded SPs are considerably pricier than FMJs. Previous tests with various bullet types seemed to indicate that the two “spinner” targets could handle .223 FMJ with no damage, while the “reset” target developed a small dimple, as it didn’t have the same range of motion as the spinners. We figured that so long as we shot the spinner targets with .223 FMJ, it’d be ok.
Unfortunately, this previous testing was done with my medium-powered handloads, and not the hot, mil-spec Federal XM193F stuff. One of us (I think it was Doug) goofed and shot the reset target with one of these speedy little bullets, resulting in a grape-diameter dent in the steel and there’s a substantial bulge on the back of the target. Wowzers, this is some hot stuff. A few shots later to the spinners resulted in one of the spinners breaking in half and sending a semi-circular chunk spinning a few feet downrange. 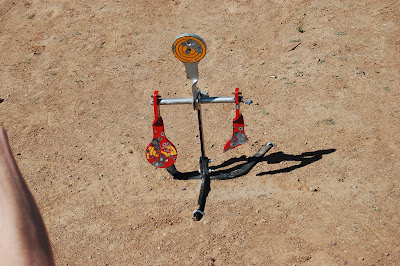 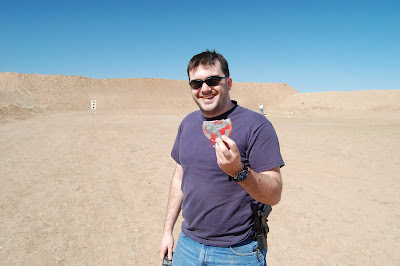 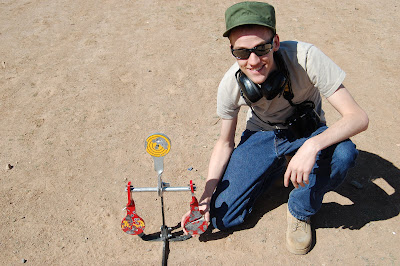 Evidently when the manual says “No FMJ”, they mean it. It applies double to mil-spec FMJ. Who would have thought? Oh well. Anyone in Tucson have a welder? It’d be nice to re-weld the target and put some heavier steel plate on there so I can shoot FMJ at it without a problem.
As .223 is expensive, we also did some rotations on the suppressed 10/22. Alas, the spinner target is too heavy and .22 won’t flip them up. Even so, the targets go “ping” and bounce around, which is fun. When we went downrange later, there were a bunch of flattened out lead disks around the spinner — evidently the .22s flatten out almost completely and just lie around the target. We weren’t able to find any .223 fragments, not even pieces of the jacket. 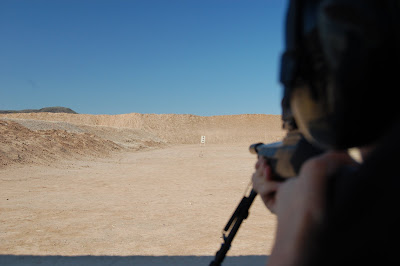 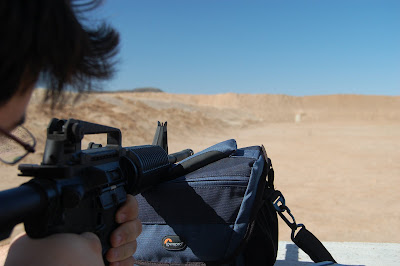 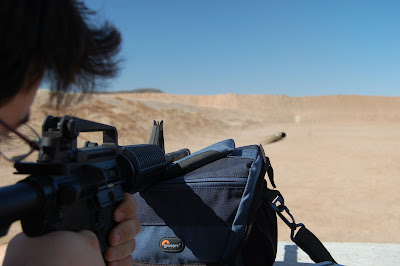 As fun as the ARs are, I think I’m going to need to spend a bit more time behind the 10/22 to get back in practice. Inexpensive ammo is wonderful, and .223 is anything but inexpensive.
Between school, trying to get in shape (both in general and for the wedding), and work, I don’t have all that much time for range trips, but I see about making some time, possibly over the summer. Maybe get involved with some regularly-scheduled things like silhouette or action-shooting matches. We’ll see.

One thought on “Saturday Shooty Goodness”