On Saturday, several friends of mine from the physics and astronomy departments decided to go out to the range for some shooty goodness — the last few weeks have been rather busy and ultimately rather trying of our collective sanity.
As seems to be normal for the group, we invited a friend (“T” — in the interest of privacy, I’ll refer to people by their initial) and his fianc?e (“S”), neither of whom had been shooting before. S is a rather jumpy person, and often gets moderately alarmed at new things. She was a little uncomfortable with the idea of going to the range, but several of our mutual friends (including “R”, a female who’s been shooting with our group for some time, and has been integral in getting other women shooters to come to the range) got her to agree to come. In the event that she didn’t enjoy shooting, she brought some work to do in the car as a “plan B”. T had wanted to come with for some time, and so needed no encouragement.
As is our custom, we arrived at the Tucson Rifle Club, paid our dues to the rangemaster (a man with…er…substantial eyebrows), and set up our targets. We had covered range etiquette safety earlier in the day. Even though it was a glorious day, the winds were whipping from left-to-right across the range, which resulted in the paper targets blowing off the wood-and-cardboard frames, and the frames themselves blowing over: 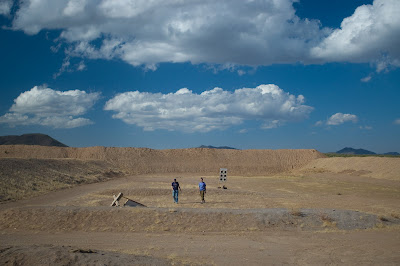 (Click on any of the photos to enlarge.)
With the assistance of a staple gun, duct tape, and some really big rocks, the targets and the frames were secured. Fortunately, the wind was moving laterally across the range rather than longitudinally, and so the targets remained secured during the whole session. 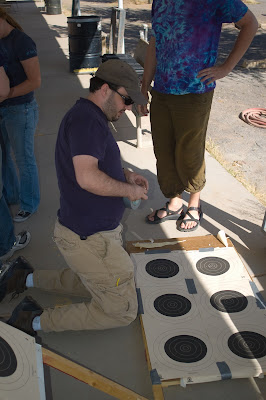 My friend L and I had spent some time over the past few days loading up a bunch of .223, and had it already loaded into magazines. Unfortunately, we had exhausted all .30-06 I had on en-bloc clips during the last session, and so we had to load clips from boxed ammo. After showing everyone how to do it, we had a whole bunch of ammo clipped and ready to go in no time: 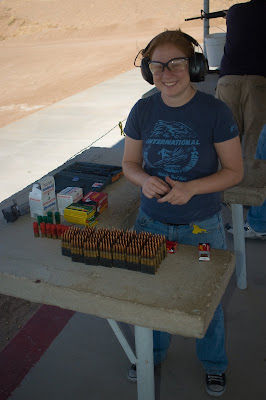 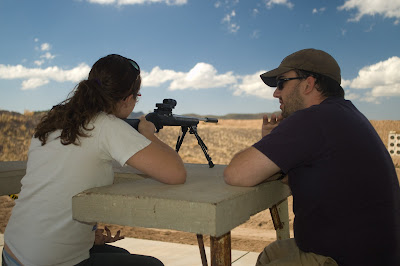 Once again, the value of a suppressor as a training aid was immediately apparent, as S was only a little jumpy when she first started. Considering how jumpy she is normally, this was quite impressive. Since the suppressed 10/22 was so quiet, additional hearing protection was unnecessary, which made it very easy for S to ask questions and for me to offer suggestions without needing to raise our voices.
After the first magazine, she stopped flinching, and was able to shoot quite consistently at 25 yards. Her “plan B” work remained in the car, untouched. 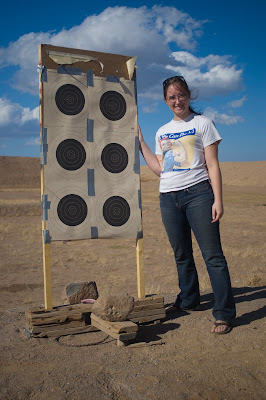 T also did quite well, and was enjoying himself. Here is he taking his first shot, ever. 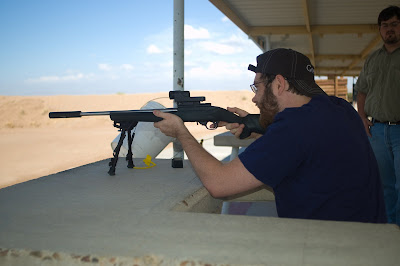 Everyone else had been shooting with us before, so we quickly moved up to other guns. T and S had no issues with moving up in caliber (we moved up in stages from .22LR –> .223 Rem –> .30-06 –> 12ga), so everyone had a blast…no pun intended.
As I watch from the background, L fully groks the meaning of “happiness is a warm gun”: 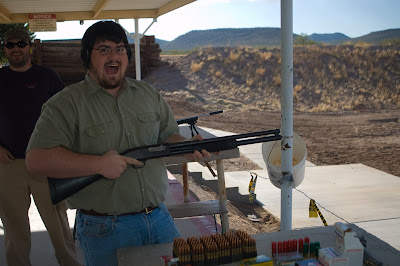 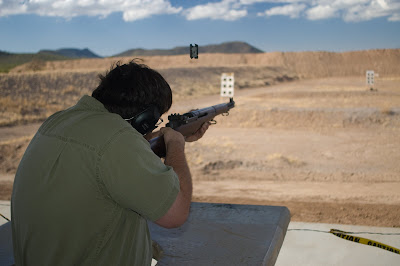 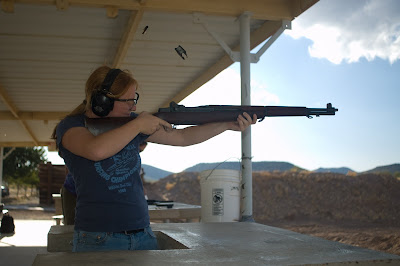 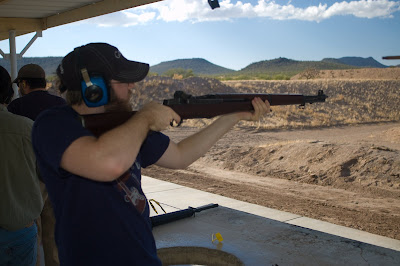 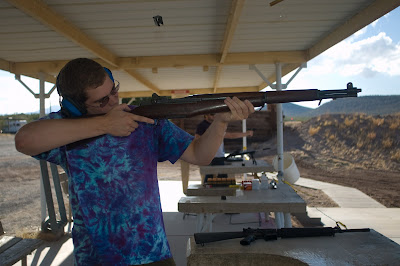 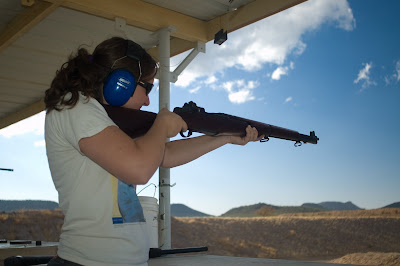 As expected, the AR-15 was a hit with everyone. Thanks to River Valley Ordnance Works and a few hours of L and I slaving over the reloading press, we had plenty of .223 Rem.
I’m of the opinion that this photo of R really needs to be on a magazine cover, or otherwise used for some sort of propaganda: 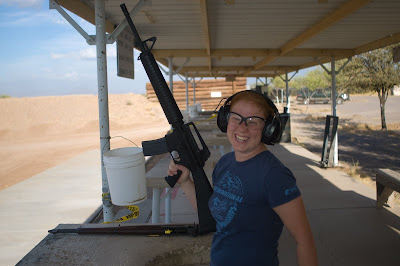 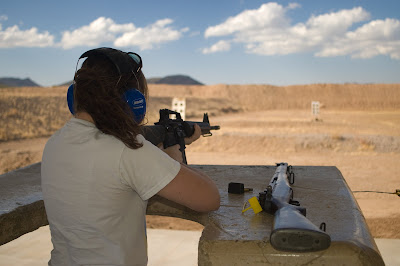 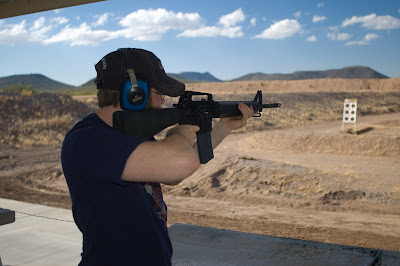 After shooting the Ruger MkIII .22LR pistol, S was overheard to ask T, “Can I get one?” I may or may not have uttered a very Mr. Burns-esque “Excellent!” under my breath…but since everyone was wearing hearing protection, nobody will ever know for sure. 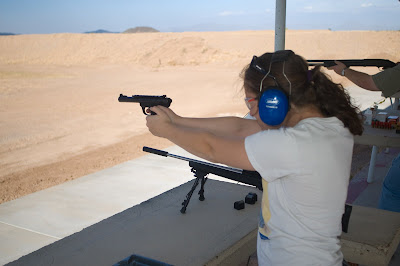 At 25 yards, the only immediately-visible holes in the targets were due to 12ga slugs: 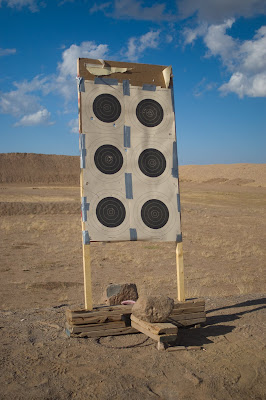 D proved to be as good of a shot with the shotgun as he was with the camera: 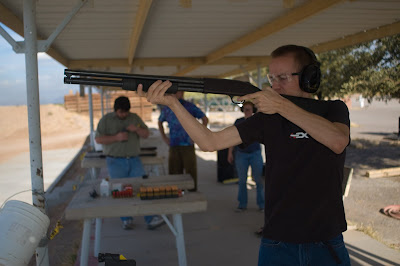 Unfortunately, not everything went perfectly smoothly — C flinched while shooting a 12ga slug (he wasn’t expecting the low recoil of the Remington Managed-Recoil rounds) and put it through the wood target frame: 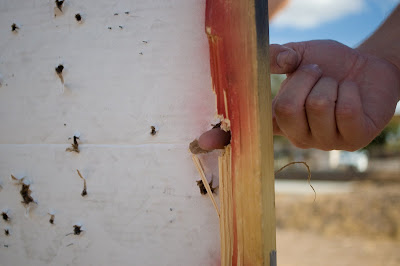 Thank goodness the rangemaster was understanding, and so only charged us the normal $1/hole fee rather than an extra fee for the extra-large hole.
In the end, the sun was our enemy and could not be defeated with bullets or smiles, so we had to call it a day. When I announced that we needed to stop shooting and clean up after ourselves, S wailed “What!? We have to stop?!”
There’s something really satisfying about going to the range, particularly when new shooters get a fun, enjoyable introduction to the shooting sports. As seems to be common these days, I had one of my “proud father” moments: 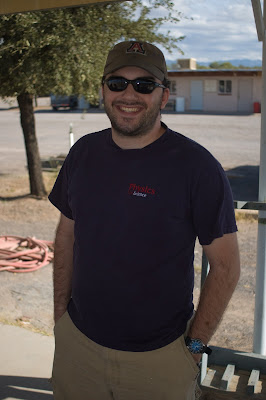 With two new shooters brought into the fold, I think I’d call today a success. What do you think? 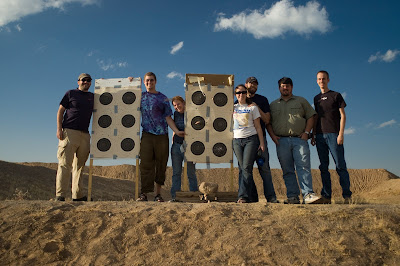