HB 2629, an AzCDL requested bill that clarifies when a defensive display of a firearm is justified, passed in the Senate Third Read on Monday, May 12, 2008 by a vote of 19-7 with 4 Senators not voting. From here, HB 2629 will go back to the House for concurrence before being sent to the Governor.

Having clarification on such an issue is important. My compliments to the AZCDL for their hard work.

Sebastian analyzes the difference in donations and spending between the NRA Political Victory Fund and Brady Campaign “Voter Education Fund”.
Here’s a brief summary:
Total Receipts
Brady: $73
NRA: $8.4 million
Total Spent
Brady: $3,000
NRA: $3.7 million
Total Contributed to Federal Candidates
Brady: $500
NRA: $413,000
Total Received From Individual Donors >$200
Brady: $0
NRA: $205,000
It sure looks like the pro-rights side is actually composed of real people.
And people why the NRA (and by extension the pro-rights side) has so much clout with legislators…

Pennsylvania governor Ed Rendell made another pitch for gun control legislation outside the state capitol on Monday, during the annual ceremony honoring falling police officers.
Rendell says the gun that cut down Sgt. Stephen Liczbinski (see related story) was a Chinese assault weapon, and he says that there used to be a ban on importing assault weapons:
?And yet in 2004, the Congress of the United States — often some of the very same congressmen who would come and attend ceremonies like this — let the assault weapons ban lapse.?

The governor acknowledged that the gun that killed Liczbinski was brought into the country ?well before that action,? but says it?s symptomatic of the refusal of lawmakers to provide ?maximum protection? to law enforcement:

Emphasis mine. Basically, he’s saying that the 1994-2004 “assault weapons ban” would have had no effect whatsoever on this particular incident.

?If we really want to pay honor and tribute to the memory of those 703 police officers who have given their lives, we will suck it in, do the right thing, and pass laws that would give our police officers out on the street, protecting us every day, the maximum amount of protection we can.?

I know several police officers, and have nothing but the highest respect for officers who risk their lives each day to keep the peace and maintain public order.
I want them to to have the resources they need to stay safe and be able to do their job, and for the most part, the public has agreed: modern police have high-quality firearms and ammunition, body armor, tasers, batons, pepper spray, radios, in-car wireless data terminals, and a whole host of other equipment, training, and resources to help them be safer and more effective.
Even so, police work is not risk-free. When your job requires that you interact with the scum of the earth on a daily basis, there’s a not-insignificant probability that you will be involved in a violent confrontation. It’s just part of the job — no amount of laws or equipment can remove that risk entirely.
So-called “assault weapons” are common firearms that have simple cosmetic differences from more “traditional” looking, non-banned firearms. They are identical in nearly all functional aspects, and differ only in appearance. Many features on such guns exist for ergonomics and safety, but have no effect on lethality. Restricting guns with such features from ownership by lawful citizenry from 1994-2004 had essentially no effect on crime or their use in police shootings. Their use in crime is statistically insignificant.
Renewing an ineffective law is foolish. Doing so when it significantly restricts the rights of law-abiding, honest folks is malicious. Dancing in the blood of a murdered cop to push for such a renewal is abhorrent.
Hat tip to Sebastian for the link to the news article.

For those who don’t know, Arizona is an “open carry” state and no permit is required for openly carrying. However, if one’s shirt accidentally covers the gun, one is guilty of a class 1 misdemeanor. Similarly, if the openly-carried gun is concealed from view in a car (I’m left-handed — if I’m stopped by a police officer, the gun is not readily visible from either side of the vehicle as it’s blocked by the door on the left and my body on the right), that’s a crime.
Heaven forbid that good guys who make an honest mistake be differentiated from criminals committing violent crime.
Oh well. Maybe it’ll pass the next time around.
Frankly, I don’t even see why permits should be necessary to carry. Vermont and Alaska don’t have permits (AK issues them for reciprocity with other states) and they don’t have any trouble. If people can open carry in AZ without any issues, why should carrying concealed be any different? The mere carriage of a firearm harms nobody. 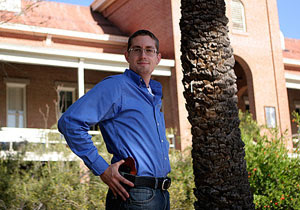 Eric Zorn of the Chicago Tribune asks that very question:

[E]ach timeit has struck me how tiny, uninspired and vague the response has been from those who favor new laws to try to keep guns out of the hand of evildoers.
While the gun-rights folks weigh in quickly and forcefully with links to studies and detailed arguments, the gun-ban folks are mostly quiet.

Zorn’s comments illustrate the amazing effects of the internet on such issues.
In the past, it took some time for responses to be published; waiting for the next edition of a magazine or newspaper often took weeks, and then only a limited number (if any) of replies were published. There was no way to direct feedback to the author, only to the editor’s desk, who may or may not forward the comments to the author. Many people received news from local newspapers, a few national/international papers, and the radio/TV news programs by major networks (CNN, ABC, CBS, etc.).
It was difficult and expensive for large networks of people to organize and communicate, so there wasn’t much large-scale organization for pro-gun viewpoints other than the NRA, which was only moderately responsive. Organizations with impressive-sounding names could posture and appear to be more influential than they actually were.
These days, the internet makes it incredibly easy to publish information, link to other sources, and spread news around (for example, Zorn’s column was made known to me by means of Rustmeister’s Alehouse, who published his posting about 8 hours ago — hat tip to Sebastian who made me aware of Rustmeister’s posting). Message boards like The High Road make it easy to communicate with other like-minded individuals around the world instantly.
These days, it’s quite clear that the “pro-gun” viewpoint is really a grassroots one…there are hundreds (thousands?) of independent bloggers, large message boards, communities, and online vendors dedicated entirely to talking about guns, selling gun parts and accessories, and so on. Word gets around the gun community incredibly fast (see the Zumbo Affair, where a deluge of phone calls, emails, and other communications resulted in Zumbo losing his column and sponsors before the NRA knew about it, let alone published a press release), with often influential results.
Let’s keep up the good work and use this influential communications medium to better effect.

The American Hunters and Shooters Association, a “false flag” anti-gun group posing as a pro-gun group, endorsed Barack Obama on the 16th.
This endorsement further cements Obama’s position as an anti-gun candidate, adding to his long history of anti-gun votes.
Hat tip to Ahab.