Police in Britain are searching for guns smuggled from the US, according to the BBC.
The alleged smuggler, who is in custody in the US, is accused of smuggling 62 guns into the UK.
The last paragraph, however, stood out to me:

Former Scotland Yard counter-terrorism chief Andy Hayman said details of the case were “genuinely shocking”.
Writing in The Times, he said: “This makes a mockery of the stringent checks we all endure at US airports, such as removing our shoes and belts, having our toothpaste confiscated and all the other irritants.
“Steven Greenoe’s guns could just have easily been bombs.”

Mr. Hayman clearly is not familiar with how things are done in the US when it comes to firearms and air travel. There are clear rules and procedures for traveling with checked firearms. In general, the firearms must be unloaded, kept in a locked case, be in checked baggage (there are certain exceptions for police officers that allow them, in certain situations, to fly with weapons on their person), and be screened by the TSA.
Since Mr. Greenoe’s firearms were in his checked luggage, they were inaccessible to himself or others during the flight. This is in accordance with US travel laws, as well as my understanding of UK laws relating to traveling with firearms. Thus, Mr. Hayman’s comments about this incident making a “mockery” of the searches of passengers and their effects is not relevant. Don’t get me wrong, I think the current passenger screening policies are absurd and well deserving of mockery, they have nothing to do with the carriage of firearms in checked luggage. While his luggage may have contained bombs, one can hope that current screening methods for checked luggage would have detected them. In addition, bombs are inherently dangerous (for example, they could explode by themselves if mishandled or if constructed incorrectly), while disassembled firearms are simply inert pieces of metal. There’s quite a difference.

Handguns aren’t.
Even .40 and 10mm won’t magically stop bad guys with a single shot, particularly if the bad guys are hopped up on adrenaline or other drugs.
Practice, practice, practice. That’s how you win, not because of what caliber you shoot.

Police pose as burglars by trying to open people’s windows and doors in the middle of the night, occasionally dragging residents out of bed to scold them. Why? They want to remind people to secure their property and cut down on burglaries.
If this happened in the US rather than Britain, it sounds like a sure-fire way to get shot.

The Daily Mail has more.
Honestly, the only good thing I see coming out of that raid is the picture where the cops are displaying good trigger discipline. Everything else seems completely outrageous.
They also show a picture of a “gun” found during the raid: 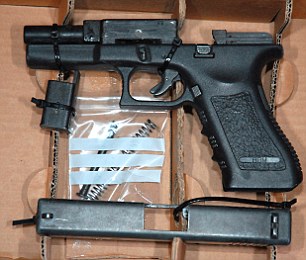 Correct me if I’m wrong, but that looks completely different from any Glock pistol I’ve ever seen. The finger grooves suggest that it’s a third-generation Glock (previous generations didn’t have the grooves), but everything else seems suspicious: there’s no metal rails on the receiver for the slide to run on, the barrel’s “breech block” is grossly oversized and looks to be made out of plastic, there’s no ejector, the spring and guide rod in the baggie don’t look anything like the type of spring (real Glocks have a flat, coiled spring instead of the round, coiled spring displayed here) or guide rod (real Glocks have a plastic guide rod that holds the spring captive), the texture on the grip looks wrong, and the flat “label” at the bottom of the grip doesn’t exist on the left side of Glock pistols. Additionally, there’s no “GLOCK” emblem on the grip.
I’d show a picture of my Glock 19, but it has a Hogue sleeve on the grip, and so conceals the left side of the grip. As such, I’ll present this image of a third-generation Glock 17 that I found from Google Image Search:

Note the differences?
If the police and newspapers can’t identify a fake pistol (probably an airsoft knockoff), dare I ask how accurate the rest of the claims made by the police are?
While I have no doubt that some of the boxes raided belonged to criminals, I’d suspect that many of the boxes belonged to ordinary, law-abiding people. Hopefully they can get their stuff back. Good luck getting anyone to keep stuff in safe deposit boxes in the future.

According to the news, a suicidal man — said to be armed with a handgun — has barricaded himself inside his house three blocks from my apartment.
Of course, TPD decided to do a full SWAT callout, evacuate ~15 houses around the guy, and cordon off a few blocks around the house.
What the hell is wrong with people?
It’s one guy, suicidal, with a gun. Put a cop outside the front and back of the house in a concealed position and get a crisis counselor to call the guy on the phone. If he doesn’t come out, wait him out.
To me, SWAT seems more suited for a hostage situation, active shooter, or some other situation that requires (here it comes) Special Weapons And Tactics, not a lone suicidal guy. What the heck are they going to do against a suicidal guy, shoot him?
I guess they need to justify the expense, huh?

It must be that time of year: three police have been shot in Pittsburgh by a gunman. I offer my sincerest condolences to the friends and family of the fallen officers.
As expected, the Brady Campaign is dancing in the blood of the slain police officers with yet another press release.
According to the Bradys, the police were murdered by a…

“…man shooting ?hundreds of shots? who apparently believed the gun lobby propaganda that an ?Obama gun ban? would lead to his ?rights being infringed upon.'”

They go on to say,

“It is time for the gun lobby to stop stoking fear among gun owners with false claims about the government [proposing some sort of gun ban].”

Further down on the page, they close with,

At the very least, require Brady background checks for all gun sales; restrict military-style assault weapons to the military and law enforcement and help law enforcement crack down on corrupt gun sellers.

I’m sorry, I don’t see how they can say that the “gun lobby” is making “false claims” about proposed gun bans when they then go on to advocate such bans in the form of “restrict[ing] military-style assault weapons.” Wouldn’t such a restriction be, by definition, a ban? I’m not sure how the Bradys can hold such conflicting viewpoints.
Thanks to Sebastian, it looks like the alleged (( Innocent until proven guilty in a court of law, of course.)) killer, Richard Poplawski, was a prohibited person due to having been dishonorably discharged from the marines:

Perkovic [a friend of the alleged killer-AZR] also said that Richard Poplawski had received a dishonorable discharge from the Marines and that he has a history of domestic disputes.

If this is the case, Poplawski would have been legally prohibited from possessing firearms. The “history of domestic disputes” might also have been sufficient to make him a prohibited person. Since the killer seems to have had no problems with violating existing laws (( Such as those against murder, in addition to less serious crimes like possession of firearms by a prohibited person, discharge of firearms within city limits, etc. )), I’m not sure what the Bradys hope to accomplish with the addition of more laws.
Update: Turns out it wasn’t a dishonorable discharge. My mistake.

KopBusters rented a house in Odessa, Texas and began growing two small Christmas trees under a grow light similar to those used for growing marijuana. When faced with a suspected marijuana grow, the police usually use illegal FLIR cameras and/or lie on the search warrant affidavit claiming they have probable cause to raid the house. Instead of conducting a proper investigation which usually leads to no probable cause, the Kops lie on the affidavit claiming a confidential informant saw the plants and/or the police could smell marijuana coming from the suspected house.
The trap was set and less than 24 hours later, the Odessa narcotics unit raided the house only to find KopBuster?s attorney waiting under a system of complex gadgetry and spy cameras that streamed online to the KopBuster?s secret mobile office nearby.
The attorney was handcuffed and later released when eleven KopBuster detectives arrived with the media in tow to question the illegal raid. The police refused to give KopBusters the search warrant affidavit which is suspected to contain the lies regarding the probable cause.

There’s no excuse for the police’s behavior. I’m glad to see that someone is “watching the watchmen”, and hope these cops get slapped hard by a judge.